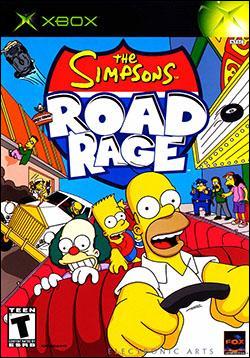 September 30, 2001
Ah yes, the Simpsons. With over 14 years of Simpsons under our belts, isn't it time we got a game that does them justice? This is where Simpsons Road Rage for Xbox comes in. The story goes that Mr. Burns took over all the city buses and turned them into nuclear reactors forcing the citizens of Springfield to pay outrageous prices to ride them, often being $100 a ticket. Now, vigilante cab drivers pop up around town (being you) to undermine evil Mr. Burns plot.

Simpsons Road Rage stars 30 characters (all not available at beginning) from various stages of Simpsons history. This game borrows heavily in the gameplay department from the Crazy Taxi series. You race around the streets of springfield looking for a paying customer, once boarded, you rush to the specified destination within the time limit.

Simpsons Road Rage features 3 different game modes to choose from : a basic 1-player mode, a 2-player mode, and a "cruise down the streets" mode. The first mode is what you would expect, it revolves around the aformentioned story, as for the two player mode, not much else is known except its a split screen race to make the most money. The third mode seems quite interesting. The premise of this mode is to just choose a car and drive around exploring, there is no time limit, no people to pick up, just smooth sailing.

With Fox Interactive and EA on the job, the game looks to be building momentum more and more as we near its November 8th launch date. The Cel Shading technique used in this game is superb as it gives all the surroundings a real good cartoon vibe we all know and love, and the characters were faithfully reprouduced in 3D. Let us hope this game can live up to its hype, and most inportantly, the legend of the Simpsons.


See News Archives
Important! I pay $ 1000! I search the Sweden launch and the Element 54 Faceplate
Post by Smill
0 Replies, 3097 Views