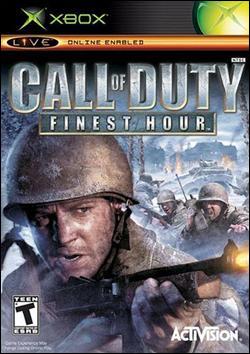 Players assume the role of different characters from multiple sides of the Allied forces as they fight alongside their squad mates through a variety of missions - including battlefield assaults and sabotage as well as vehicle chases and tank battles. Gamers step into the boots of a U.S. paratrooper or a Russian infantryman as they take on the Nazis through pivotal World War II battles and historically accurate military campaigns.
Score: 82
Overall User Average: 8.20 / 10 (82.0%)
Gameplay User Average: 8.40 / 10
Graphics User Average: 7.80 / 10
Sound User Average: 8.40 / 10

Overall: For those who like FPS or WWII fans, or both...this game will provide a nice...distraction...while more in depth, detail and historical accuracy than Medal of Honor, it is sort of short and can get you a little frustrated.
Gameplay: The twitch gameplay of FPS and the the frentic pace of large scale and buidling to buidling conflicts keep this one moving. While the slow time moments add drama when under heavy fire or explosions while on foot, they can be frustrating and slow down gameplay. Yet the varied tank driving, sniping and other forms of thwarting the german war machine keep things moving nicely.
Graphics: While not the best looking, some of the explosions, no pop-up and very atmospheric environments keep things visually stimulating. Plus the weapons, uniforms, towns and vehicles are modeled after the real thing, good stuff there.
Sound: Take the soundtrack from "Saving Private Ryan," "Band of Brothers" and maybe some "Enemy at the Gates," and you have a good idea of some sweeping/stirring war anthems, but also some slightly puzzling, verging on annoying, background music or sounds. Yet the tank sounds are cool when driving around in tank to tank battle.
Suggestions: The thing missing here is an offline multiplayer...while Xbox Live is HUGE now, those of us few who don't have it would like to pummel our friends from within a tank, turrent or from the scope of a GW3. But a good job overall.

Overall: This game has it's ups and downs. Great visuals, challenging maps are some of the ups. Slightly unrealistic (when you bomb a building with a tank the building should fall down), Squad members aren't the brightest (but there are ways around that) are some of the downs.

But all in all the game is a blast and joy to play.
Gameplay: The gameplay is smooth with many various challenges throughout. On average it takes anywhere from 30 - 60 minutes, depending, to finish a mission which isn't bad at all. I just hope that it isn't like Allied Assault for the PC and suddenly come to an end and leave you thinking "that's it??"
Graphics: Visually this game is excellent. I found the graphics were well thought out and realistic. No complaints here.
Sound: The sound is great, I have never been in a wartime situation myself but I would imagine that the sounds of bullets whizing by your head and the bombs dropping all around sound pretty much like they do on my Dolby Surround (just scarrier)
Suggestions: Add more realistic destruction. I want to be able to bomb a building with gunners in it and see it fall down. Or at the very least put a fair sized hole in the side of it.

Overall: Call of Duty for the PC and its expansion pack are 2 of my favorite games of all time. So when this game was announced I was very excited. This game doesn't even come close to the PC version, but it's still a solid war FPS.
Gameplay: The great thing about Call of Duty is you never fight alone. In the pc version your squadmates never got in the way and werent as dumb as the ones in this game. The save system is very frustrating especially after going for 15 minutes without a save then dying and doing it all over again. This is your basic run and gun fps with a few tank missions in between. The online play is okay, I havent experienced any lag so far, but there are voice problems.
Graphics: The graphics are very ps2-ish and don't look good at all.
Sound: The sound is top notch along with the music in the background. Except, the guns sound funny.
Suggestions: Take a lesson or two from the developers of the PC version. Get a better save system and develop the game for the xbox first. More maps, gametypes, and allow vehicles online. This game screams with potential, except it was poorly exectuted.