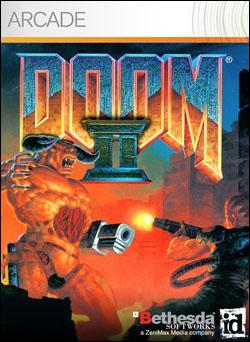 Doom II is back again, this time brought to Xbox Live Arcade by Bethesda Softworks and Nerve and though it showed up sporting some new polish, some tweaks to the multiplayer, and tweaked cooperative play, it remains to you to judge whether this latest release of the classic game is worth 800 Microsoft points. Doom II does show up on Xbox Live with a new bonus chapter - No Rest For The Living - and some unlockable goodies for your profile avatar - but this isn't the first time Doom II has been available on Xbox 360. Doom fans who paid the ten dollars extra for the collector's edition of Doom 3 five years ago got a perfect port of the original Doom (with bonus chapter) included on the disc, and the followup Doom 3: Resurrection of Evil less than six months later included perfect ports of Ultimate Doom, Doom II, and Master Levels of Doom, all with splitscreen multiplayer."

Complete any level in Single player
10

Complete any level on 'Nightmare' in Single player
20

Find a secret area of a level in Single player
10

From Earth To Hell

Complete all levels in 'DOOM II: Hell on Earth' in Single player
25

Complete all levels in 'DOOM II: No Rest for the Living' in Single player
25

Burning Out of Control

Complete any level with 100% kills, items, and secrets in Single player
15

A Man and a Half

You Have Huge Guts

Kill a CyberDemon using your fists in Single player
20

Find a BFG in Single player
10