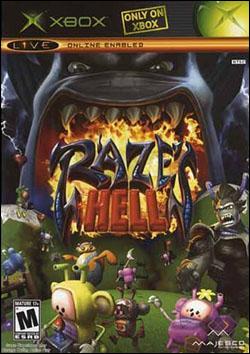 In the same week Majesco releases its revolutionary, one-trick pony: Psychonauts, I completely forgot about Raze?s hell, whose trailer popped up in the middle of summer last year. Its premise seems interesting, but not completely original."

read more
A darkly comic action-shooter set in a fantasy world overrun by fiendishly cute creatures, Raze’s Hell follows the exploits of Raze, a monstrous anti-hero who takes a no-holds-barred approach to stopping an onslaught of adorable characters and restore his planet to its naturally ugly state. Under the leadership of their twisted Princess, the Kewletts are trying to impose their disturbingly distorted view of utopia upon the masses. Raze goes to war against the Kewletts, gaining the respect and assistance of some of the other inhabitants of the planet.
Majesco Raze’s Hell
Majesco's newest action game, Raze's Hell, has just launched the official site of the game. We also have some new screens for you enjoyment on this game that will be released in April.