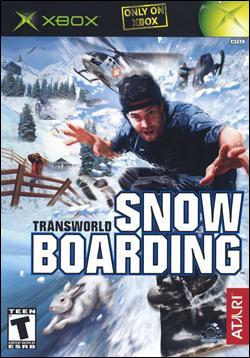 Overall: This is simply the best snowboard game yet. It easy to play but offers room to grow. I do snowboard, and I can tell you the game gives you a little of the sensation of "being there" However, I think snowboard games in general are boring so I can't give it a 5.
Gameplay: It's snowboarding game. The tricks are easy after you get used to them. I have a hard time jumping on rails for some reason.
Graphics: It's got great graphics, the best yet actually. Very colorfull and interesting lighting.
Sound: Nice sound.

Overall: This game is simply a must buy for any Xbox owner. I've read that line on several reviews thus far, but this game deserves those words. This game has it all. Great graphics, good sound/track and just a lot of fun to play. Basic tricks are easy to perform, so anyone can practically pick the game up and start playing at a good level. I rank this title right up with Halo.
Gameplay: Lots of good game play. You can race against others, or challenge them in a score. The career mode is not rediculously crazy on the goals you need to accomplish either. Levels can be unlocked after a rather small % of goals completed, and you can unlock new boards too. The more goals you accomplish at the lower levels, the fewer goals you need to accomplish in the higher levels. There's secret areas and a ton of area to board, so you don't feel confined like most skate boarder games I've played. There's other fun things in the game like rabbits and moose (or deer) sometimes jumping in your way, along with cars, trucks, snowmobiles and snowplows.

I've read the other reviews and most are saying the game would be great if it included XBox Live support and if it included a "build your own skater" option. Personally, I could give a crap about building my own skater. Playing this game on XBox live would be great, but it shouldn't keep you from purchasing this title.
Graphics: Very good graphics. Great looking rails, mountains and snow. I must admit there cabins and people could have been a little better, but you'll be blown away with everything else so it won't matter.
Sound: It sounds like you're snowboarding. When you hit a rail, it sounds like you hit a metal rail. When you hit a tree, it sounds like you hit a tree. The "ugh" noise can be a little annoying if you hit things more than you should and the default volume for the music is a little higher than I wanted. What makes the sound good in this game is that it's not overwhelming. The sound is good because of the lack of it - you feel as though you are skateboarding down a mountain, not in an arcade game.
Suggestions: Very few suggestions. Put it on XBox live. Clean up some of the outside graphics like the audience and houses. Keep making more games as we need more titles like this.

Overall: Now that I've purchased and played transworld I'm not as mad at electronics boutique for only givin me 7 bucks for my amped trade in...transworld snowboarding will make you forget about that stuff...it's got much better graphics then amped and is more fun to play then ssx tricky...without question
Gameplay: ahh the gameplay...the controls are perfect and the tour challanges introduce you to all the great areas of the mountains and tricks you can pull, so before you know it your actually good at the game...and you'll need to be good to unlock the levels. The levels are huge and so are the runs that are opened for shreddin....I have zero complaints on how the gameplay and mountains are setup....
Graphics: finally I think were starting to see real 2nd generation graphics from our xbox. The look of transworld snowboarding is simply amazing..the snow textures are perfect...the mountains are rendered in great detail and the riders and thier animations are done extremely well...basically it's the best looking game I've seen on a console yet.
Sound: uhm well it's perfect..perfect sound effects...perfect soundtrack..and you can customize it...nice

Overall: This game is a snowboard game that anyone can play and enjoy. It has great graphics some good tunes with a variety such that everyone can find something they like. It controls well and after a couple runs you'll be able to do satisfying tricks.
Gameplay: This game controls just like Amped minus a few things. You cannot nosepress, tailpress, noselide or tailslide in this game. Which kind of sucks. You can however do tons of other things. You can rotate on rails and do any sort of flip spin combination you can think of. The control scheme is well laid out. The left control stick maneuvers tha playeers major movements (flips/spins/turning etc), while the right joystick controls the many grabs. The a button is the jump button, x is a speed boost and the b and y buttons grind. It is very well done in that department. There are a couple of modes you can ride in. As well as different types of riding. There is a "career" mode where you complete certain goals to unlock new lev I wouldn't really call that a career though which, I guess, is why they called it Transworld Tour. There is also a single session mode and multiplayer. In those modes you can ride pipe, slopestyle, backcountry and boarder cross. Unfortunately there is no create a character. There is enough in this game to keep you busy for at least a month though.
Graphics: Beautiful. They look better than Amped. Rails actually look like rails! Not just flat plastic! Ofcourse there is alot more to the graphics than that. You have too see it to understand. Just gorgeous. Heck, there is even wildlife roaming around.
Sound: There is some decent music on the soundtrack and it includes the "my soundtrack" feature where you play your own music of the hardrive. The sounds in this game are pretty good and it uses dobly 5.1 well.
Suggestions: A nice career mode would be appreciated. Maybe a create a character.

Overall: This is by far the best snow-
boarding game for the X box. If you liked amped get ready for Transworld.


Gameplay: The game is smooth. There's something special about landing an 85 meter jump on fresh powder snow,
The controlls are set up nicely to help you land. The tricks you could do are endless. With plenty of characters, boards, and levels to unlock this game will keep any snowboarding fan busy for months. There's also plenty of multiplayer fun ( up to 4 players ) turn based or split screen. Some other modes include: freeride, transworld tour,
and single session.

Graphics: Takes great advantage of the x box.
The mountains in the background make you feel as if you were really there.
The ice parts look similar to great work done in Rallisport challenge. The frame rates must be pretty high?
Characters really look as if they were freezing and there animation really makes this game a winner.
Sound: There are several well known bands in the mix. You have options on who to listen to mainly by genre. Punk, hip- hop, beats, rock. The cool thing about the way it's set up is that if your playing and you want to skip a song or here one again you just push the white or black buttons and you're good to go. It would deserve a five if you could listen to something burned onto your X box.
Suggestions: Downloading new levels from x box live or OXM would have been a plus.

Xbox one no signal
Post by debrartin
0 Replies, 27014 Views