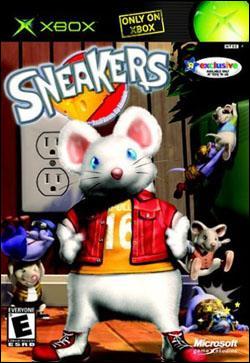 Sneakers™ is a fun, comical adventure filled with cartoon combat. Players take on the role of a mouse named Apollo, who must lead his friends through a human-sized town to battle the enemy. Fights are comical battles where you throw wind-up punches and flying kicks while also directing the actions of your troops. Being mouse-sized offers its own unique advantages and obstacles. A rolling apple could be as dangerous as a tumbling boulder while a small hole in a wall serves as an ideal shortcut. Players have to be cunning and quick to find and defeat the enemy. Sneakers is being developed by Mediavision.
Score: 60
Overall User Average: 6.00 / 10 (60.0%)
Gameplay User Average: 5.50 / 10
Graphics User Average: 6.50 / 10
Sound User Average: 6.00 / 10

Overall: Sneakers is a fun game that plays along the lines of such games as Knights of the Old Republic. You play as a disgruntled little mouse who is looking for the ultimate stash of cheese. You see, the adult edge in this game is that cheese is actually a modern drug in the mouse underworld, and it is your job, as a cheese-addict to seize this stash for your own personal usage from drug kingpin underworld mouse mob bosses.
Gameplay: Mob bosses chop off limbs, heads and even legs if you aren't careful. Along the way you have to make a few tricky choices just like KOTOR as well, the gameplay stops while you make a crucial decision that could affect the game's levels and outcome. Word to the wise: save often.
Graphics: The graphics are crisp and clean. There really are no complaints since this is probably one of the best sleeper hits of all time. This game looks great, and you'll be apt to agree.
Sound: Although some of the music is sub-par to Xbox's standards, the addition of Alien Antfarm Vs. DMX (featuring Robert Van Winkle) as the exclusive "theme song" to this game, makes it worth the purchase price alone considering I have never seen that track released commercially on any of their albums except for this game.
Suggestions: Make a sequel with everything I just listed above.

Overall: OH MY GOD......What happened to the at least average Xbox game. This is by far the worst game not only for the Xbox but for any console.
Gameplay: You press 2 buttons and move the joy stick. DO NOT GET THIS GAME. For the safty of your children and/or your unborn children. This will give anyone who plays it mental scars.
Graphics: The graphics were even subpar in this game. I honestly have joked about crying while playing games before, but I cried until I fell asleep on the night I played this. And the only reason I am giving the visuals a 1.5 is because it will not allow me to rate the game lower.
Sound: I acctually did not hear the sound of this game over my own weeping. I don't think that every pop star and great musical artist could ever make a soundtrack for this game.
Suggestions: I pity the 4 people on this planet that might have bought this game.

DO NOT MAKE ANY MORE GAMES