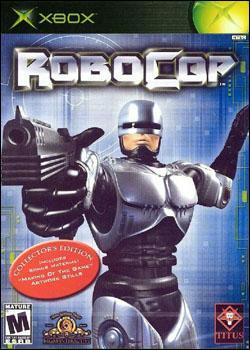 The future of law enforcement now ready for the worlds most powerful console! Based on the hugely successful feature film from MGM this is the next generation of Robocop now on Xbox! Taking the role of the hit character Alex Murphy your mission is to uncover the sinister plot against Cybernate humanity, fomented by the evil OCP researchers. Robocop is an all out intense first person 3D action game mixing pure fast-paced gameplay with thrilling cutting edge technology bringing the whole Robocop world alive!
Score: 40
Overall User Average: 4.00 / 10 (40.0%)
Gameplay User Average: 2.00 / 10
Graphics User Average: 3.00 / 10
Sound User Average: 2.00 / 10

Overall: You are Robocop, or at least - you are supposed to be Robocop, although it somehow doesn't feel as invigorating as some fans of the original film would have hoped for, you start each level watching TV news that has nothing to do with the game in a sad attempt to associate the game with the movie. Then once the news is over, you are sitting in the chair in your corner at the OCP police preceinct. Some cop walks over to you, utters a few lines, and then you're on your way. I assume you're supposed to have been able to *pick* what missions you wanted to accomplish across town, but no matter whose name you highlight on the suspects screen, you always go to the same level you were supposed to. You go to levels and shoot badguys, try to miss the innocents. Sometimes you have to collect something, sometimes you have to rescue hostages.
Gameplay: Really quite choppy. I had a rough time shooting accurately without using the analog stick to zoom in at a target, which is a huge time consumer when youre trying to take out multiple targets shooting at you from different angles on screen. So overall, I'm sad to say the gameplay control is bad.
Graphics: The game doesn't look *terrible* but is very far from being anything innovative. The best screens in the game are when Robocop is at the preceinct in his chair, and that is sad.
Sound: The music is pretty awful, the voice acting is TERRIBLE. What more can I say? Robocop gets all excited when he kills someone??? Plus, that doesn't sound like Robocop? That sounds like some high school teacher pretending to be Robocop as a joke to his afternoon class. Also, there is a voice acting part that is so inappropriate to the theme of the Robocop series more than any other : when you die, you hear everyone in the police office BOO at you in unison, then some wimpy black guy is all like "youre a disgrace. have you ever heard of POLICE ACADEMY? go sign up"

Yeah, like a programmed robot, let alone ROBOCOP should sign up for police academy. Whoever wrote the dialogue script for this game should be fired immediately and put back into the food industry flipping burgers at burger king.
Suggestions: MAKE A GOOD ROBOCOP GAME! Get Peter Weller as the voice, get a competant script, or even base a game on the original film DIRECTLY! Thats what we want to see! Not some slapped together piece of crap like this that ruins the perfect license: Robocop.