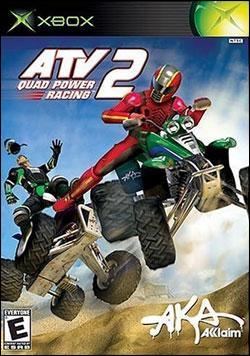 Overall: Usually you get what you pay for comes into place on everything. However it really doesn't stand with ATV: Quad Power Racing 2. If you like lower prices than this game is for you. It is cheap and the game is quite fun to play.
Gameplay: This game is easy to learn how to play. Not hard at all. You'll then realize that this game is fun to play. Do crazy tricks off jumps, kick your oppponets of there ATV, it really is great.
Graphics: I think ATV: QPR 2 has a very clean line graphic for this game. It truely is smooth and makes it more enjoyable to play.
Sound: Sound is great. Engine sounds ok. Only downside is that you can't have your own custom soundtrack in this one.
Suggestions: Make more, there fun to play. Just improve from this one and it should be great. I'd suggest throwing this on Xbox Live, also having a true freestyle contest.

Overall: Only 30 freaking bucks for one of the most entertaining games I have played for the box. What a deal. This game is easily worth every penny.
Gameplay: Game play is right on the money with a few small quirks. Controls handle great and buttons are easy to get used to. The tricks are easy to pull off once you get the hang of the game. The one part I didnt like is that you have to let go of all buttons after hitting a jump and wait a second before trying any tricks. Other than that I have no complaints.
Graphics: Visuals are pretty good, nothing spectacular but not bad either. Having hot girls in skimpy outfits adds to the visual appeal.
Sound: Good mix of songs that give the feel of racing, a few more would be nice because I am kind of getting sick of the same songs over and over again, even though I do like them. Good sounds when you wipe out or kick someone else off their bike.
Suggestions: Custom soundtrack, get rid of lag when doing tricks,more atv's, more tracks...even though there are 15 its really only five with differnt routes but they are pretty good, Keep the price of #3 at the $30 mark

Overall: Best game value I own so far.
For the money it has provided more than I expected by far.
Has Tower & Ground challenges that made it like another whole new game for me.
Gameplay: Lots of diversity in what you can do.
Even the kids ranging from 6 to 14 loved playing this one.
Lots of variety in things to do without just having to race.

Graphics: I rank this right up there with Panzer Dragoon Orta for graphics.
I have a 65" HDTV and this game looks awesome.

Sound: ATV's sound a little bit lame.
The soundtrack is rockin but I get annoyed with soundtracks after about the first half hour.
Suggestions: My only slight negative was the sound effects.
I think playing on live would have been pretty awesome.
Still a great game for the cost.
Awesome job overall.

Overall: This game has a wide variety of game play. It makes the user want to try out differnt things and doesn't keep him/her bored. The gameplay slighty gets boring in arcade mode, but the different amount of levels making it more interesting. The graphics are not terrible and they are not excellent-decent. The sound and music in the game instantly gets stuck in your head (and i gaurentee you will sing along if your in first). Overall this game is worth the $40.
Gameplay: The game is very diverse. You can choose many different characters. Chicks wit nice racks, hicks, and regular racing guy. There is a large amount of different bikes to choose from. And like I said there are a lot of levels. This is fun to sit down and play especially with friends in freestyle mode.
Graphics: The terrain is highly detailed and so are the riders and bikes. The game looks realistic for a quad raciing game, can't get much better.
Sound: The songs are terribly annoying and they are just plain old terrible... Sorry i wish you could pick your own songs from the Xbox Hardrive.
Suggestions: Yeah...Get some better music and don't do vertical split screen in multiplayer....its terrible.

Overall: ATV: Quad Power Racing 2 is to the PS2's ATV Offroad Fury 2, as peas and carrots are to filet of Wild Virginia Bass with melted Savoy cabbage and Spanish caper emulsion. They're both foods that will feed and nourish you, but one is obviously more refined and sophisticated, offering up a more diverse palette of flavors and textures. If you're looking for an ATV game for your Xbox, you're out of luck. If you've got a PS2, go with ATV Offroad Fury 2. Quad Power Racing 2 offers some decent racing fun and can be enjoyed in short spurts, especially with a friend, but really isn't worth a buy.
Gameplay: Been here done that gameplay and an unresponsive trick system bring this one down. It reminds me of a certain ps2 game that is overrated.... ;)
Graphics: Better than run-of-the mill graphics. Nothing more and nothing less. Just plain boring... compare it to that ps2 game i talked about above ;)
Sound: Licensed music is a pretty safe bet when you do this type of game. Some more defined ambient sounds would have helped, as well as a larger selection of bands
Suggestions: ... make it seem like something totally new. It just seems this has been done before WHICH IT HAS

Overall: This is a solid game that I love. It has some cool tricks, and great gameplay to go with it. Overall, I would give it a solid 4.
Gameplay: The racing is pretty cool. Once you unlock all the bikes, it is the best because each bike has its advantages. Some are super fast but can't handle the turns as well as others which aren't as fast. The multiplayer is also fun, yet the only downside is if you have friends over and the only profile you have is yours, the person who uses your profile is the only one that can use your tricks. You have to unlock certain tricks in career mode.
Graphics: The game looks good. The environments are cool and the bikes and players look good. Nothin out of the ordinary though.
Sound: The sound in this game is the best part! The songs are perfect for this kind of game. The sound fxs are pretty good, nothing out of the ordinary. But the songs make up for it.
Suggestions: A live enable version of this game would be awesome. But wouldn't a live enabled version of every game be awesome? *sigh*

Players will be able to create a Spellbreak account and access it on any supported platform to maintain their game progression, customizations, and stats when it launches for PC, PlayStation 4, Xbox One, and Nintendo Switch.