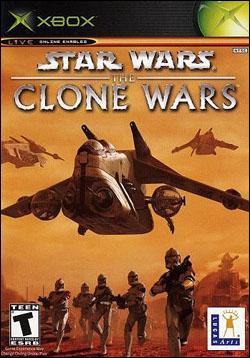 "Begun, the Clone War has" - Jedi Master Yoda. It starts where Star Wars: Episode II Attack of the Clones ends. As Jedi Anakin Skywalker, Mace Windu or Obi-Wan Kenobi, you lead the Republic Army in the greatest battles of the epic Clone Wars. Your directive: to stop the Separatists from reassembling an ancient Sith weapon of mass annihilation. Battle for survival in a variety of multiplayer games with up to four players, from Deathmatch to King-of-the-Hill -- and even strategic Conquest games. And engage over 30 unique combat units as you wage war across six worlds in the galaxyís most unforgettable conflict.
All Extras:
enter at the code screen- igiveup

Overall: Ok, I whant to make this clear once and for all, every time i play clone wars, i get confused and think i am playing a rouge squadron game because, that is, basically, all you do through out this star wars title. Fly and shoot things. If i whanted to do that i would have bought a Star wars: rouge squadron title (which i was trying to avoid.)So i guess what i am trying to say, is that clone wars is not at all what i had expected and/or whanted it to be, because i whanted to walk aroung slash a couple of bad guys, do some cool jedi stuff and, well, ok, ok you do get to do that in clone wars, but for only 9% of the game, the other 91% of the game is flying.
Gameplay: The controls are pretty good, And thats always a good thing so that there is atleast one good thing about this wanna-be rouge squadron rip-off star wars title.
Graphics: The ships are nice to look at, as well as the explosions, and particle effects, ect... so overall the graphics are pretty solid despite the fact that the character models are kinnda lame, but i am not going to allow that to effect the score since you barly get to play as a character through out like the whole game, oh, well, besides that lame 9% that i mentioned earlier.
Sound: Good sound, good music (if you like the star wars theme, and other instramental noises the game throws at you) and even better explosion. shooting, ect... sounds.
Suggestions: Next time you make a star wars title with out the "rouge sqadron" name in it, try to make it what it should be......Think about it..hmmm...

Overall: The regular part of the game is a little better than average even if your not a huge star wars fan. The xbox live part is great. see discription below.

This game is right up there with mechassault for xbox live games and will get as much play from me. All modes are very fun to play
Gameplay: Like I said the gameplay on non multipayer is a little above average. The XBOX LIVE part is great. There are 4 modes of play.

Acadamy (Co-op) where waves of ememys come at you and you earn points by killing enemys.

Duel. A team or individual game. Where you can fight every one on there own or as teams.

Conquest. A team game where the objsctive is to take out the other teams headquarters. This is the most polished of the online games. If I explained this entire mode I would probobly hit the 5000 word limit.

Control zone ( king of the hill) where you try to hold a circle in the center of the map. This can be played individual or team just like duel.

Graphics: This game could of looked a lot more polished on the xbox. The game play makes up for that though. Some of the fog and dust effects look very good though.
Sound: The sound is great in this game. As with any other game that supports dolby digital. This game is good in this department.
Suggestions: You need to be able to continue play with the same players after you have finished a match in live. I've heard there is suppose to be a patch coming for this soon. After that is fixed I believe this will be one of the top couple xbox live games.

Overall: What can I say, I like this game. It's good looking and has a nice variety of vehicles.
Gameplay: I havent finished the game, but I like the variety of vehicles and choice of difficulty.
Graphics: In general everthing looks good. If you get close to an object, it starts looking bad. Its very colorful and reminds me of INCOMING for the PC.
Sound: I used Dolby 5.1 and the channel seperation was helpfull (if a ship is behind you the engines whine in the rear speakers.)

Overall: Average to below average for the Star Wars line of games. A game with a decent plot line, but poor game control and poor graphics makes this a mediocre title at best. I sold the game the same week I bought it.
Gameplay: Like all the Star Wars games, you shoot stuff. You do most of your killing inside vehicles. Some of them are difficult to control. Too difficult in my opinion. There are also parts of the game where you get out of your vehicle and kill things with your light sabre. This part of the game is so horribly done it is laughable.
Graphics: It looks like Star Wars. There is a war going on in the back ground, but it always seems like you are not participating in it. You can run your vehicle into clones and droids and they just get bumped out of the way. It is odd. The bad guys you do shoot look nice, and blow up in cool fashion.
Sound: Very annoying, and unfortunatley required to play the game. For instance, Luminara is your wingman to start the game. She talks all the time--"yap, yap, yap" But she is also guiding you through the level, so you need to listen. You can't turn the volume down. It sucks to have a game you don't want to listen to.
Suggestions: Were you guys in a hurry or something? This game blows.

Overall: its a great SP game but MP sucks really bad, so thats why i didnt play much on live with this game,
Gameplay: well your a bunch of different people doing the star wars thing, riding these dino's, tanks, planes, using your lightsaber, very fun
Graphics: its actually not bad, i really didnt pay attention to the details since this game is very fast paced, but the cut-scenes were nice
Sound: the average star wars music, sure its the same thing over and over again but your to busy playing to really notice it
Suggestions: better online PLEASE!

Overall: There is nothing that excites me as much when it comes to gaming as a new Star Wars game. And knowing this one would be playable on Live was the icing on the cake. Well, that is until I played it. The online aspect of this game did not quite live up to my expectations. The action actually needed to be slowed down a bit. It seems like you get shot once or twice and you're dead. Plus, there are such a small selection of vehicles while playing online. The choices get boring very quickly. I will say that I enjoyed the menu and ease of getting online. I have heard a lot of complaints about lag but for me that has not been an issue.
Gameplay: This is nothing more than a vehicle combat game online which isn't necessarily a bad thing only it isn't done well. Offline it a pretty good game that you will enjoy if you are a Star Wars fan. You have your escort, protect, and destroy missions. Pretty standard. There are also a couple areas where you are a jedi with a lightsaber. A neat touch that has promise it just needs to be worked out a little more.
Graphics: No complaints here. I will point out though that the textures are decreased online. Not that you'll notice much because the action is happening so fast you don't have time to stop and smell the roses so to speak.
Sound: Perfect. When you play this game, there is no doubt you are listening to John Williams and are a part of the Star Wars universe. The sound effects are great as well. This is the one thing this game does well.
Suggestions: There is really no reason why we should have such a small selection of vehicles to choose from. What I would like to see is a game where you are not limited by a single movie but rather all the vehicles from all the movies, and yes I am talking about The Millenium Falcon, Slave I, as well as an AT AT Walker. Maybe even when you beat the game you could pilot a Star Destroyer. Think Battlefield 1942 but Star Wars. Also, make sure the online element is fun. I have never been more disappointed.