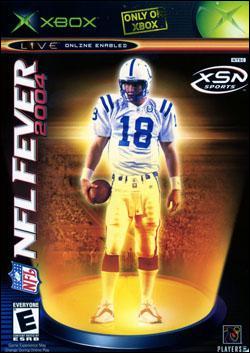 Just how big will online console gaming get? One of the indicators of it success is hinged on how well Microsoft?s XSN sport series does."

read more
"NFL Fever" is back and better than ever. The third installment of Microsoft Game Studios' exclusive football title for Xbox, "NFL Fever 2004," redefines the console football gaming experience. Gamers will be impressed with the features of this latest version of "NFL Fever," with revamped artificial intelligence (AI) including significant offensive and defensive adjustments, animated NFL coaches roaming the sidelines offering situational analysis, a brand-new offensive playbook, totally reworked stadium models and "Read and Lead" advanced passing. From traditional, single and multiplayer gaming to league and tournament play on Xbox Live, "NFL Fever 2004" is taking football gaming to the next level.
Get All teams:
enter the code sportxsn

Overall: NFL Fever 04, was what I thought would be 03/04's best football game. I was sadly mistaken because 2k4 takes the crown in my books. Still entertaining though for a few hours, especially on XBL.
Gameplay: The way the field runs is almost the same as most football games... except the CONTROLS! GAH! I could not stand the controls in this game. The way they were set up just hurt my brain trying to make plays.
Graphics: The graphics were decent. I could not really complain here. They did there job and thats all I asked for.
Sound: The commentary was still good. The sound effects were to. But since sound doesnt mean a WHOLE lot in a football game, well it didnt really matter at all.

Ubisoft Sports
Good news for fans of Ubisoft, and sports games. Ubisoft will be developing a series of sports titles. This xboxaddict can’t wait for the games releases. Read on to see what else Ubisoft acquired.
NFL Fever 2004 Goes Gold
Microsoft’s NFL Fever 2004 has gone gold and will hit stores on August 28! So lets see some hustle out there, you pansies!