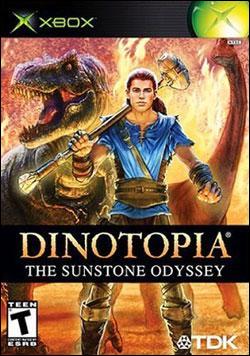 Dinotopia: The Sunstone Odyssey is centered around a unique civilization wherein dinosaurs and humans coexist. Gamers will become immersed in a world of sights and sounds like no other. Defending the island of Dinotopia from a rogue group of thugs, players navigate this land through swamps, villages, ancient jungle ruins, and far above the ground in a town quietly nestled in a forest canopy. When travel is prohibitive on foot, take to the air through desert canyons on a flying dinosaur called a Skybax, or along tropical trails atop a robotic beast known as a Strutter. Thwarting evil with an arsenal of high-flying attacks against a multitude of creatures and mechanical monsters, players control Drake Gemini in his quest to reunite his family and become a Guardian of Dinotopia!
Score: 65
Overall User Average: 6.50 / 10 (65.0%)
Gameplay User Average: 6.00 / 10
Graphics User Average: 5.50 / 10
Sound User Average: 6.00 / 10

Overall: the only reason i am rating this game is because the last guy that rated it gave it 5 and that put it to the top of the Action Games ranking.
Gameplay: The game sucked. It sucked so much I hadn't heard of it until I read the last review on it. How terrible could it have been that i didn't know it existed until I had to.
Graphics: The graphics? Jee im glad i didnt have to look. they musta hurt just to be in the same room with. Only person i would recommend this to is a blind guy.
Sound: Likes nails on a chalkboard folks. Nails on a chalkboard. The voices sucked, sounded like they were done on my mic next to my comp with the standard PC voice recorder.
Suggestions: Yea dont produce crap. also dont let people write high reviews for low games.

Overall: I absilutly had no objections while playing this game.I was all worth the money.
Gameplay: The gameplay almost gave it a scence of being an RPG.I exspecially loved that.
Graphics: Now the visuals could have been better.That was one of the most dissappointing parts of the game.
Sound: The sound in the game remindes me of Jurassic Park.I was an overwhelming experiance when you encounter one of the Dinosours.