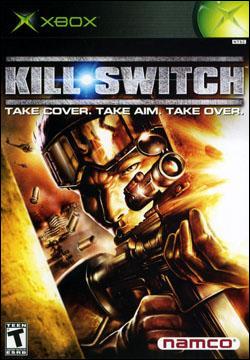 When you think all avenues are exhausted in a military based game someone comes up with a new wrinkle. The someone in this case is Namco and Renderware?s Kill Switch, and the new wrinkle is ?"

Overall: Good single player FPS game, but it does have a few problems. It is very innovative though. I suggest renting before you buy it.
Gameplay: This game starts out with a training level which is very well done, it teaches you the basics. The levels are kind of short. I do like the way you can peak around corners and almost hide behind anything including a recliner and peak over top of it and shoot.
Graphics: The graphics are good but could have been better, the players faces look flat and no mouth movement when they talk.
Sound: The weapon and grenade sounds are not that good and realistic. The in-game soundtrack does not immerse you into the game play.

Overall: This genre of game usually doesn't interest me. However, this game opened my eyes, and left me very amazed. The game so far is great, and if I ever get a long period of time, I plan to play this a lot more.
Gameplay: Kill.switch has good controls, and the big thing with this is the ability to use cover to your advantage. 99 times out of 100 this is awesome. The AI aren't necessarily braindead, as I've been covering myself from one side, only to eat lead from the other, but they aren't to the point where you just get frustrated and quit. The variety of stealth positions is excellent, and it shows it was well drawn out. Blindfire is alright, but really I don't mess with that. The only complaint I've heard is that it's a really short game. I'll find out as soon as I actually beat it.
Graphics: The visuals are great. You look good, as do the soliders and the terrain around you. Lighting leaves a small bit to be desired. This really doesn't affect you, but the concept of your shadow being behind the object your hiding behind isn't quite right. Other than that, this is aesthetically pleasing.
Sound: Sound left a little to be desired. The music got very repetitive. A little more effort could have put in toward the sound aspect, but it's not to the point your ears will bleed and your head will explode.
Suggestions: Sound could have used a little more effort behind it. And no Xbox live was kind of a shock. This would have been a great title to put on Xbox live, and it might have made me a believer into actually getting Xbox Live.

Overall: Kill.switch isn't your ordinary 3rd person shoot em up type game. This game actually requires some major skill! The game is pretty short I hear, I havent completed it yet but so far it is awsome. Anyways, kill.switch allows you to hide behind objects such as: walls, crates, pillars, cars, pipes just about anything big enough for you to duck for cover under. The graphics are pretty good but you may find the levels being very repetitive. There is alot of going down hallways over and over shooting the same old guys until finally you get to where you need to go. Don't get me wrong this is really fun but the game can be very frustrating at time. Levels vary in length between save points and after playing a level 20 minutes then gettin hit by that rocket launcher right at the end can agrivate the mind.
Gameplay: Kill.switch offers 2 difficulties: normal and hard. But normal alone is a pretty big challenge so hardcore gamers looking for a challenge should check this out. Anyways, once you have beating a level you can redo it easily with the click of a button on quick mission for extra replay value. The control scheme in kill.switch is brilliant. Using the left trigger to press up against the wall and the analog stick to peek your head out and shoot is very easy to do and fun. But, my favorite feature is the blindfire. It is when without looking you stick your gun out blindly and fire away. It is very unaccurate but when your crouching behind a box, and another "baddie" as they call them is right behind that very box, blindfire comes in handy. As he sticks his head out to try and find you just pop that gun over and cap him no problem without taking a hit. One problem though is the story line is weak. First couple hours of play I have no idea whats going on in this story and why it seems like show everyone I see wants to shoot me. Heh, whatever just follow the objectives right....
Graphics: The first couple levels visuals look stunning as bullet holes form into walls as you shoot around and peices of wood fly up from crates. This looks really cool, the main character looks great with his goggles and stuff. The bad guys, again on the first few levels are great. But they repeat themselves over and over. As do some of the levels showing the same hallway 2, 3 4 even 5 times. This can get a little annoying but it still looks good.
Sound: The fire of guns sound pretty much similar for the type they are. The sniper is a silenced shot, the shotgun is good and sounds like a shotgun but all the other automatic rifles sound the same. Except for the big powerful one the rips guys up. the sound of grenades blowing is always good and when you throw a flash guy infront of a bunch of people they scream and wince in pain flailing around holding their eyes. But the voices of the enemies are rather repetitive. But sound is a VERY important feature in this game. Hearing your enemies talk to each other and say commands such as, "cover me I'm going in" and other various phrases plays a role in your killing. This way, you know what they"re doign and you can prepare for their strike and hit hem down before they can even raise their gun.
Suggestions: I'd like a multiplayer, that would be nice. Friends taking cover and sneeking up on eachother would be a blast.

Overall: There?s so much to love in Killswitch. Being able to hide behind almost anything, peek around, and blast the heck out of all that moves never gets old. It?s like the cool arcade game Time Crisis, except Killswitch is not on-rails and is in a 3rd person view (coincidentally, they?re both made by Namco). However, the story in this game is pretty hard to follow, but like other cool action games in the stealth-action genre, that?s not too important. Hiding and shooting isn?t too hard to do, and the game looks and sounds great. My only gripe is the game isn?t too long.
Gameplay: Killswitch is never anything more than hiding behind an object, whether it be a pillar, a wall, or a car, and shoot any and everything that moves. Controls are simple, like ?press this to shoot, do this to move, and press this to hide.? Some missions can be completed in a 10 to 15 minutes, while others can take up to 30 minutes. With only around 15 missions, Killswitch would be really short if not for the fact that most missions take a couple times to complete.
Graphics: Killswitch has great graphics. However, its hard to tell how good they really are when you shoot the same 5 guys a bazillion times each level. The main character looks good, the levels definitely above average, and the guns look realistic (but then again, I don?t know how the guns should really look). Thankfully, the objects you?re supposed to hide behind aren?t too hard to pick out, like a car in the road or a big box in a warehouse. That?s helpful, since most environs aren?t much more than a simple town, rooftops, or a weapons factory. The saving grace in Killswitch?s graphics are the cutscenes, the most memorable being the one where the main character shoots up all the baddies in his house, with blue blood and everything!
Sound: The sound in Killswitch is above average, but not anything sensational when compared to the sound in bigger titles like Freedom Fighters. The disappointing lack of weapons means most guns end up sounding the same (trust me, after shooting the same 3 guns for a few hours they?ll sound the same to you too). Each bad guy has an accent, which gets pretty old after a while. Also, the techno soundtrack (?what a surprise, another game with techno!?) isn?t very good either. The only good sound in this game belongs to the main characters, who all do an excellent job.
Suggestions: More variety than just running and gunning, like maybe a puzzle or two and a few non-shooting, perhaps comical minigames, like being able to find a car, and you have to guide the main character correctly out of the enemy compound, pressing left, right, A, B, etc. ala Shenmue.