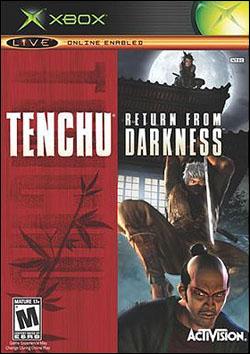 The moon hangs low in the sky. I hear the movement of my enemies below. As I sit on the edge of the roof."

read more
Set in the late 1570's, one year after the original Tenchu, Tenchu: Return from Darkness allows players to assume the role of the ninjas Rikimaru, Ayame or the mysterious Tesshu as they battle the evil Tenrai and his six lords of darkness. As silent assassins, players must use cunning, strategy, deadly stealth and an arsenal of weapons to overcome dangerous missions and defend the Japanese countryside from Tenrai's armies.
Score: 69
Overall User Average: 6.00 / 10 (68.7%)
Gameplay User Average: 5.00 / 10
Graphics User Average: 4.50 / 10
Sound User Average: 4.00 / 10

Overall: Well, I just bought this game used for about 50USD.. Big mistake. This game sucks. This gets my number 2 for worst game ever. 1 being Onimusha.. I will try and sell this game back, where was for onimusya, i destroyed the game and mailed to back to the developer demanding my money back.
Gameplay: The controles suck.. The camera sucks.. I can't hit anyone, and I can't see a !&%$@#* thing. It's so simple too, i don't know how they messed up
Graphics: These graphics are terrible. I was having a hard time deciding between this game and XIII which just came out here.. This was 30bucks less, so i choose this game. I dont understand how the same company that made Otogi and Otogi 2 (my fav. game ever.. otogi 2) could make a game this terrible.
Sound: The sound was like mono, through two speakers. disgusting.. again, how can otogi 1/2 be so perfect, while this game sucks so much.
Suggestions: Yea, plenty. But, they all stem from Otogi. Otogi was great, all the great things in that game, don't stop doing those things. This was just another PS2 port. I'm sure that if i tried playing this game on the ps2, i'd have the same problems..

Overall: Being an import from the ps2 version I knew I would like this game. But is it really better than the ps2 version? The answer is yes, the game is very similar to the first, Tenchu: Stealth Assasins. It features the same characters, pretty much the same weapons, and the same style of fighting. Well, it is almost too similar, the only thing really changed is the graphics, xbox live cooperative or versus mode (and story of coarse)
Gameplay: Well, the controls are pretty basic, A is jump or more often used, "double jump". X is the standord slash, or stealth move. Y is to use the selected weapon and B is to block. Pretty easy to use button configuration but is, very standord. The right trigger puts the camera behind your character (which by the way moves painfully slow), The standord left thumbstick moves your character and other helpful (but not absolutely needed) buttons are available for maps and such. I found that it was easy to change items with the directional pad, and to use the grappling hook to reach high destinations which by the way are key in this game. The camera angles can be annoying at some times, but with practise you can figure out how to use them properly. It is very easy to perform a stealth kill, but to get close enough to the person to do so is a challenge. Which is why dropping down on people from roofs is key. The only real, "killing and fighting" portion of the game that is bad is the head to head fighting. Sure, its easy to block and slash the air but actually performing these moves on guys is hard! You have a very small range with your primary weapon so you have to get close. It doesn't run very smoothly at all and can often have you throwing the controller at (breakable) objects. For example: Try playing the level, you are being very sneaky and conserving your items. You finally get to a boss, which is after about an hour of stealth killing. You start fighting him, he gets one combo on you and your already half dead (or more) You get him down to 9 health, then with one cheap move, he kills you. Oh and by the way, you can only save between levels not after missions. YOU NOW HAVE TO START THE LEVEL ALL OVER!!! Very frustrating at times.
Graphics: Gee, I was really hoping it was gonna shine big time here but it doesn't. The visuals seem like high quality ps1 graphics! Similar to the first Tenchu but more fine lines and quality. The graphics still are good but even in cut scenes it needs work! I was not impressed here. The only thing that looks good is the stealth kills. They look cool and awsome but the blood can even seem more like a gas floating into the air...The graphics are playable but it's nothing special here!
Sound: On the start menu, the music sounded pretty cool, but as soon as I started hitting start and selecting my game modes it started hurting my ears! Well, sort of. I believe they are trying to make a cool sound of swords clanging together but it sounds more like an ear peircing screech of a sacred bat or something IMO. But to get on to the game....When going head to head, you here the voice of your character. The voice is very weak! A very fake emotion is present, as well with the guards who if spot you shout, "NINJA" then they blow their whistle and start fighting you. While hitting a blocking enemy it sounds horrible! Gee, they really did mess up the sound here. Also, after awhile of hearing some sort of repetive ninja music and footsteps that sound loud, not like a ninja at all!
Suggestions: Just fix up the sound and graphics and head to head fighting.


See News Archives
Important! I pay $ 1000! I search the Sweden launch and the Element 54 Faceplate
Post by Smill
0 Replies, 5337 Views