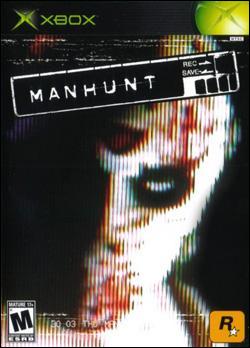 I\'m sitting on the sofa playing Manhunt when Mark gets home. \"What\'s this?\" he asks me."

read more
Walk in the shoes of James Earl Cash, a man sentenced to death only to find himself given an unexpected and sinister reprieve. Forced to fight and outwit hordes of bloodthirsty gang members vying for his head on a platter. All orchestrated for pleasure and profit by the voice of an unseen Director.
Score: 83
Overall User Average: 8.38 / 10 (83.3%)
Gameplay User Average: 8.50 / 10
Graphics User Average: 7.88 / 10
Sound User Average: 8.75 / 10

Overall: This game is truly unique in its own sick and twisted ways. This game is definitly not for the light hearted. This game deserves its mature rating and i personnaly think that every game should lead from this ecample.
Gameplay: The gameplay is pretty intense and the way you can sneak up on your enemy to pull off the finishing kill is great. You can also build up your kill meter for even more brutal kills. The only reason that this game doesn't get a perfect five is because the AI is not the brightest crayon in the box. You can just run to a hiding place and the AI doesn't even see you.
Graphics: The visuals are pretty good and the gore effects are awesome. The cutscenes are great, because you can see every bit of your killing aggression.
Sound: The sounds are pretty realistic and they definitly add to the overall feel of the game. The music isn't too noticable, because you are more worried about being spotted.
Suggestions: This a great game, but the AI is pretty dumb and that is pretty much the biggest concern. Everything else looks pretty good and the story was pretty good too.

Overall: Rental thank goodness. This game looked and seemed pretty cool when I first started looking into it. I'm not a big fan of Rockstar titles so far due to poor graphics and limited story lines so this one did not do much for me either. Just gore and the same old stuff after you knock off the bad guys on the first couple of levels, hey wait a minute...you're a bad guy too!
Gameplay: Movement was decent, the graphics and game engine are just too simplistic & ugly by todays standards which is one of the reason I own an XBOX vs other platforms - it has good graphics capabilities so the developers should be obliged to use them.
Graphics: Lousy graphics. The kill scenes are OK but like I said are repetive once you've seen a few levels worth. I actually got bored and returned it early as I failed to see anything new that would keep me interested in playing it.
Sound: Decent, works well with surround sound. I have to put at least 100 chars in this box so just skip the rest of this.
Suggestions: Step up to the plate guys. If you want a stealth shooter it's too late splinter cell beat you too it, if you want a good fighting game it's too late also as ninja gaiden beat you to that, if you are trying to develop something with good graphics you have not come close once. So far I have not seen anything from Rockstar worth spending a nickel on. My suggestion is to innovate and jot just rely on gore and cursing to sell product. The concept of this game was fair, the execution of the project was lousy. Back to the drawing board...

Overall: In Carcer City,nothing matters anymore and all that's left are cheap thrills. The ultimate rush is the power to grant life and take it away, For sport.This time James Earl Cash, you are the sport.They gave you your life back. Now they are going to take it.
Gameplay: Manhunt is a 3D Shooter/ S/H genre of game.You play as James Cash.You see, Cash was put on death-row but was later freed by a directer named Starkweather.....or so he thought.James is hunted by gangs who are payed to track Cash down and slaughter him using weapons ranging from Plastic Bags to M4 Colts.As you would expect Cash can use these weapons too and since he was sentenced to death because of his murderous past, you know he has some skill with a weapon.Cash can use melee weapons to perform gruesome executions each more violent then the last.You can also use a variety of ranged weapons.I personally love the over the shoulder aiming camera.Your ultimate goal is to survive but later towards the end you have other plans on what to do.Gameplay is pretty decent but it just feels like your running from one dark place to the other.Gets boring way to easily.
Graphics: Visuals have a very grainy(in a good way)look as if it were being filmed from a real camera.Kudos to Rockstar for that bit of detai.The environments look pretty bland though.
Sound: The sound is possibly the best thing about this game.Impailing someone with a crowbar sounds Voices are kind of lame but the sound of hitting and killing the hunters sounds disgusting and real.
Suggestions: If you make another Manhunt which I strongly suggest you dont,make it a little more exciting.Also, make it seem like theres more of a purpose then just surviving.Overall, Manhunt is an interesting game.Keep it away from the "you

Overall: I am of the opinion that Rockstar, along with Ubisoft, have been on an awesome streak as of late with their recent game releases. Manhunt is no exception, Rockstar appeals again to the inner criminal/serial killer in us all, and it works, when you give it a chance.
Gameplay: Like Splinter Cell meets the snuff film, a game that doesn't remake or add to the stealth genre, but definitely ups the ante on gore in games. If you like being in the shoes of a man with nothing to lose, with pretty good controls as well, and some gut wrenching yet somehow fun kills, pick up this game now.
Graphics: The graphics are very much like the grainy type film style of movies such as Blair Witch or even many eye witness videos. While some of the environments are kind of dull, some character models are interesting, yet disturbing, and the close up execution style of filming will make you jump at the unexpected and want to try and go one better the next chance you get.
Sound: The game lags a little here, and the heart thumping when enemies are close or in tense close calls is pretty fitting yet can become monotanous quickly. The director talking throughout can be kind of funny if not unnerving, and the hunters talk amongst themselves and mumbling to themselves can be unique and add to the experience.
Suggestions: I think Manhunt 2, if or when it comes out, while be even better than this first game. I'm not sure how online or multiplayer would work, but it could be fun. Hey Rockstar, good job on this one.

Overall: Truly fantastic, demented snuff film game.
You are a death row inmate sent out to kill
a bunch of Insane Clown Posse-type gang
members, with stealth as your number one
weapon. The killings are brutal. I love it.
Gameplay: Kind of a mix between GTA and Splinter
Cell. Creep around through the shadows,
keep quiet, sneak up on the bad guys, and
then "snuff 'em out!" The controls are
pretty easy -- the most important part is
to learn how to build up for the more
shocking killings. Great cat-and-mouse
between you and the a--holes you are
trying to kill. Fantastic job with the enemy
AI.
Graphics: Very nice shadows, truly grimy settings,
and the gore....it's really wild. Rockstar
delivers the goods for us more mature
gamers. This is a game that should never
be ported to GameCube. Very nice touch
with the video static & surveillance camera
effects.
Sound: Two words: "Brian Cox". This is the actor
who provides the voice for the snuff film
director who tells you what to do. A
perfect choice! You may remember him as
the original Hannibal "The Cannibal" Lecter
in the movie "Manhunter". I'm a big fan of
his work, and here he delivers the goods
with glee. The sounds throughout the
game are creepy and effective. Things are
usually very silent, so when you hit a
shopping cart or accidentally cause a
noise, it startles you -- and the bad guys.
Suggestions: Sequels sequels sequels. Also, allow us to
replay the snuff killings, maybe from
different angles. The training instructions
should linger a bit longer...I sometimes
had trouble reading them before they
disappeared.

Overall: This is a Very intense stealth/action game. Rockstar has put fourth yet another smash hit. This game is rated "M" for a reason, and if you can stomach it, your in for a pyscho-crazy ride! It's you against everyone, and shadows are your best friend....along with that glass shard and nail gun..
Gameplay: The gameplay is fairly straightforward. With that said it has a pretty high difficulty level, and the controls take a bit to get used to. Though, once you do its second nature to creep up behind a thug and snuff' him. The gameplay is very addicting and keeps you comming back for more even after to get stomped 10 times in a row for accidentally coughing in your xbox live communicator-alerting the thugs in your vacinity.
Graphics: The visual style is awesome. The whole game has a "grainy film" quality to it (which you are able to turn off if you dont like it). When you go in for a stealth kill it switches to a close up veiw of the carnage, so close blood and other body fluids get sprayed on the screen. Comparing this to the PS2 version the graphics are much cleaner with the lighting effects being slightly better.
Sound: I loved the sound in this game. A few people might not even know this but if you hook your xbox live communicator device up while playing the director yells at you through it instead of your stereo speakers. You can also talk/make noise/curse at the thugs via the headset and they will hear you and come looking for you...sweet...just remember to turn if off if you feel the need to clear your throat or sneeze. Thugs and the director say things not suitable for the young, or easily offended(Makes me laugh though). The 5.1 audio is clear, easily allowing you to determine where enemies are. All in all the sound design in this game is awesome.
Suggestions: When/if a sequel is made, work on the control a bit more. Seems like they tried to copy splinter cell, but fell short...which can make for some frustration.

Manhunt Selling Out In The UK
Since being linked with the murder of Stefan Pakeerah, Rockstar’s Manhunt is reportedly selling out in stores across the UK.
Manhunt Pulled From Shelves In UK
It was reported today that UK retailer Dixons has pulled Manhunt from shelves in response to the recent killing.
Manhunt Blamed For Murder
Rockstars controversial title Manhunt has been cited as the main reason behind a tragic killing in the UK.
Take Two Adds Barbara Kaczynski
Take Two announced today the appointment of Barbara A. Kaczynski to the Companies Board of Directors.
Take-Two Announces Scaler
Take-Two has announced they are working on Scaler, a 3D platform game set to be released in October for PS2, GameCube, and Xbox.
New Manhunt Screens
Rockstar also sent ten (10) Manhunt screenshots for us all. Check’em out!