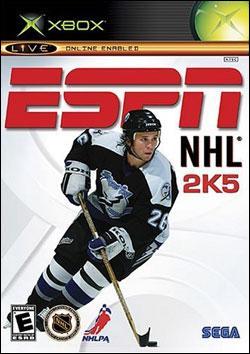 The latest installment of Sega and Kush games is ESPN NHL 2K5. Building on the past two releases (NHL 2K3 and NHL 2K4, a lot was expected from this upcoming title. The ESPN series of hockey games are known for their dedication to sim style hockey, and appeal to the hardcore hockey fan."

Overall: Three things that !&%$@#* me off about this game are 1) the sweep move which almost always guarantees a goal 2) The camera in the Gauntlet mini-game is horrible and 3) The franchise glitch where if a team has more than 3 injuries on the roster the game freezes everytime. However, ESPN still manages to be a solid title.
Gameplay: Franchise is great (excluding that bug), the mini-games are insane fun, the dream team mode is a good challenge at times, and the controls are great. Last years EA NHL was horrible, I don't think they know which direction their heading in, arcade or sim. ESPN is defintely more of a sim, but it still is fun. First, they added some checking animations, not a lot, but more than ESPN hockey which had the over the boards animation and the fall on your knees animations which I saw 90% of the time and drove me crazy. When I first started playing, I noticed noone was falling down, just guys bouncing off each other. Well if you go into the gameplay options and turn checking all the way up, guys like Pavel Bure can lay down big hits which I didn't like so I turned it down to notched and now guys like Pronger and Chara lay down big hits while the little guys sometimes lay down a big one themselves. Goalies sometimes are so sick my jaw drops watching them topple around the crease, then there are times where you shoot from center ice and they miss a glove save. Don't ask me how, but it does happen, even guys like Martin Broduer and Marty Turco. The deking stick is great, basically it moves the puck in a direction to avoid poke checks and with the modifer you do dekes and the like. Works out great, just need to know which deke you'll be doing when you flick the stick in a certain direction cuz some take longer than others.

The fighting system defintely isn't great, I loved the NHL2004 one and the Hitz Pro one as well, this is decent, it's not like the old PS1 affair where you just hit to buttons really fast, just a lot of backing up and sneaking in for an attack.

Like I said the minigames are a blast, great party fun.

I'd recommend getting this, but the new one comes out in like 2 weeks for $20 so there really isn't a point.
Graphics: Iono what it is but hockey players rarely look like how they look in real life. I mean in Madden they get it down good sometimes, but hockey games are almost NEVER. This again is the case, you see a lot of the same faces. However, the jerseys got some nice detail as does the ice reflection, though the ice generally only looks worn down until the camera goes away from the ice, meaning each play stoppage, it looks new again, though I heard this year they are adding something to that effect.
Sound: All the NHL Hockey Tonight music is there, crowd chants are great, often chanting for goalies after they have a huge night. Slap shots, the glass breaking sound, announcers, are all pretty solid. Though Thorne and Clement repeat a lot of what they say, what lines they did record were solid enough you shouldn't mind.
Suggestions: Fix that franchise bug, make the ice look worn down, how bout the PPM NHL is adding, I wanna be able to hurt guys with a slap shot too!

Overall: One of the best hockey games i've played to date. i'm a loyal ea sports fan, but i decided it was time for a switch, and i am glad i did it. the game is much more of a sim and its gameplay is very realistic. the party game mode is a sweet addition and is very well done. most of the games are pretty !&%$@#* fun and can get really competitive. franchise mode has a lot of depth to it in which you can control your franchise's farm team, hire coaching staff,etc.
Gameplay: love the gameplay. it is much much better then ea's arcade like hockey. it took awhile for me to get adjusted to the way the players skated because it is much more realistic than ea's. i find that it can be very difficult to score goals in this game. when you do score, it has a very rewarding feeling. the hitting is pretty good too. love the hip checks. only complaint is when playing against people, lots of penalities, but that can be adjusted with sliders
Graphics: very polished up presentation, could be done better. some of the cutscenes are funny. i found some of the player models good, but they could be touched up a bit more. overall, good graphics
Sound: great sound! announcers do an excellent job calling the action, but they do get somewhat repetitive after awhile. some of the sounds do get cutoff when you push a button to skip cutscenes during breaks in play.
Suggestions: spend more time fixing bugs before you release your products. 2. change the ending cutscene's for fights, watching both players fall to ice looks stupid and seems unrealistic for a sim game. 3. maybe add some stuff from the nfl series such as the halftime show, but summaries in between periods for better presentation

Overall: EA really messed up when they changed all of the controls on me with NHL 2004. This totally left the door open for Sega to walk right in and steal a place in my heart with ESPN NHL Hockey. When I played it, I just fell in love. The new game, 2K5 is more of the same, and no surprises there.
Gameplay: There are lots of little improvements to the gameplay, and there are lots of cool things to do, like air hockey and shuffleboard. If they add in a foosball minigame for 2K6, I'll preorder it right now. If you were familiar with last year's game, you'll feel at home with this one. There are some new additions that are cool, but I find myself button-mashing most of the time, and even that is still enjoyable.
Graphics: Visually, I had hoped for more. Last year's was great, and this year's is slightly improved, but everything is just not as real as I was anticipating. That's not really that fair, because I notice a lot of cool things in this game, but just sometimes it seems the puck is attached to your stick with an invisible wire, allowing you to deke and shoot with the puck on the wrong side of the stick. Some of the movements are repetitive, but all in all, it's alright. The camera angles would be nicer if they had more flexibility, more modes, including a broadcast-type option where there are various angles. I know it might be hard to play like that, but I'd practice just to have it look like I'm watching on TV.
Sound: Sound is good, especially when you go into the options and change the default to Broadcast, so that the announcers are louder. They can sometimes be repetitive, but that's alright. It's not nearly as bad as some of the older games I've heard, and at least there IS commentary (not like some other sports games out there *cough*WWE RAW*cough*). I did notice that sometimes the voices get cut off-mid sentence, even if you aren't pushing any buttons. That's sorta annoying, but I just try and ignore it. The 5.1 sound is nice.
Suggestions: A little more work on the visual aspect of the game, and fix the sound issue I mentioned, and you're unstoppable! Unless of course, EA brings out a title with foosball in it, then I might have to check that out.

Overall: The AI so far has impressed me. I have never seen this smart of a defense. The new 2on2 games on a mini rink or regular rink are a blast. This is a simulation game, not arcade style. There are party games too.
Gameplay: Very nice, If you are a Gamer you may not like this, if you are a hockey player and a gamer like me, you will respect what they have done here. One thing i wish they could and is harder checking for when I am in a hard hittin mode. The slider is all the way up and i still want more.
Graphics: Excellent! One thing they could change, I use the 3/4 camera, i just wish when the other team got the puck and was going down on mt screen i could get a better view of my defense. Also the ice is to dark at the begining of a period. Other than that, great job sega.
Sound: I like the new commentating. 5.1. Haven't really noticed anything yet that's bad. I have nothing more to say.
Suggestions: Camera views, brightness of ice at begining of period.