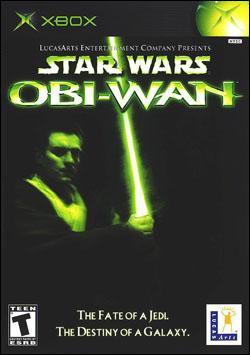 XboxAddict.com talks to the busy folks over at Lucasarts Entertainment about their involvement with the Xbox, and their upcoming title called Obi-Wan.


Q: XBA: What do Lucasarts developers love about the Xbox?

A: [Mike Gallo] It's architecture allowed us to bring Obi-Wan over from the PC in a very short time. Within weeks we had a version up and running on the prototype Xbox hardware. Also, and this isn't REAL news to anyone, it's an extremely powerful machine!

Q: XBA: What type of story line can we expect from Obi-Wan?

A: [Mike Gallo] The story starts off days before the events of Episode I. Obi-Wan is investigating some suspicious activity in the lower levels of Coruscant, and uncovers a plot that weaves its way into Episode I. It centers around a new enemy called the Jin'ha, and their development of armor and weapons made from cortosis, an alloy that has lightsaber resistant properties.

Q: XBA: Will Obi-Wan have multiplayer capabilities? If so, what are they?

A: [Mike Gallo] We have a two player versus mode that allows you to spar against one of 8 other Jedi. It's a great way to practice your lightsaber and force skills for the game.

Q: XBA: Some of the coolest scenes in the Start Wars movies are it's fight scenes. What will be some of the special maneuvers that Obi-Wan will be able to perform? How much light saber/sword play will be in this game?

A: [Mike Gallo] Obi-Wan has a several different acrobatic moves including cartwheels, somersaults, and rolls. There are also Force jumps, 180 spins, and several other evasive maneuvers. The entire game is based around the lightsaber, and we came up with a really unique way to translate that into the game. With the right analog thumbstick you control all of the lightsaber moves. If you press to the left, Obi-Wan will swing in that direction. If you press to the right, he'll swing to the right. There are of course double tap moves, active blocks, and force lightsaber swings.

Q: XBA: Some of the best special effects in the Star Wars movies are when on of the Jedi's uses the force. What kinds of forces will Obi-Wan be able to use?

A: [Mike Gallo] In the game we have Force Jump, Force Push, Force Pull, Force Throw, Force Focus, and Force lightsaber throw. Force Focus is new to Obi-Wan and allows him to temporarily "slow time". In effect this gives the player more time to react to what's happening on screen. The lightsaber throw is a personal favorite since you can steer the lightsaber after you've thrown it. It's a really powerful move once you've mastered it.

Q: XBA: What villains will be appearing in Obi-Wan? List them all, at least the popular ones.

Q: XBA: After watching some clips from the game and seeing how fluid the movements are. Were the character movements in Obi-Wan motion captured or strictly animated?

A: [Mike Gallo] All of the animation was done in house by two of our talented animators.

Q: XBA: In the movies the Jedi's always had allies. Will Obi-Wan have any allies to help him out during his journey?

A: [Mike Gallo] Throughout the game you will run into several characters that will help you out in some way or will fight with you. Qui-Gon joins you in 2 levels, and in others you'll meet up with resistance fighters that will help you through the streets of Theed or through the many locked doors of the palace. There are also areas where you have to protect or rescue certain allies.

Q: XBA: How does the Obi-Wan title make use of the Xbox's special features?

A: [Mike Gallo] We're using most of the special features: self shadowing, bump mapping etc. We've also written a pretty cool particle and physics system for the game.

Q: XBA: A big thing that contributed to the atmosphere in the Star Wars movies was the excellent orchestra music conducted by John Williams. Will he be conducting the music for Obi-Wan?

A: [Mike Gallo] All of the music in the game is from John Williams original score for Episode I. We've also used a few other music cues from the first 3 movies for some of the big action sequences.

Q: XBA: What will make this title stand out from the other Xbox titles?

A: [Mike Gallo] The game has a really intuitive and unique control scheme, and it really is a lot of fun to play. Also, the ability to use a lightsaber and special force powers will make it stand out. Finally, for fans of Star Wars it gives them to see some of the "behind the scenes" events that weren't in the movie. Just what was Obi-Wan doing whenever Qui-Gon was off collecting parts? Now you can find out!

Q: XBA: Is Lucasarts planning more Xbox titles? (A simple yes or no, if you can.)