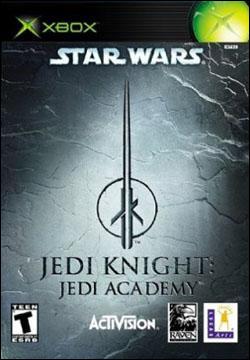 
Q: For those unfamiliar with the Jedi Knight series, could you give a short backstory?

A: The Jedi Knight series has followed formal Imperial officer Kyle Katarn through his days as a mercenary working for the Rebellion, his discovery of his connection to the Force, and finally making peace with his Jedi destiny. Jedi Academy marks a new direction for the series as the player will create his own Jedi and train the ways of the Force at Luke Skywalker’s Jedi Academy, where Kyle is now a teacher.

Q: Does the story stay true to the original Star Wars universe, or is it something specially crafted for the series?

A: The game takes place during the classic trilogy timeline several years after Return of the Jedi, so you will see a lot of people and places from the films. We’ve really had a lot of freedom in creating the game, so we’ve included elements that we liked from the classic trilogy, Episodes I & II, and some of the expanded universe novels and comics. There’s a little bit of everything in here so there should be something for everyone. Ride a speeder bike, fight a Rancor, etc. There’s a lot to do. (-:

Q: An interesting feature has been added: character customization. What are some of the options for creating our character?

A: The player will be able to choose their sex and species from several recognizable Star Wars aliens, including Rodians, Twi’leks, and Zabrak (Darth Maul’s people). Once they’ve chosen their species, they can mix and match a variety of heads, legs, and torsos. Then they can customize and color their outfits to create the exact look for the character they want.

Q: Will we have a choice of our lightsabers? And will they be upgradable? (i.e. what color and single or dual sided)

A: The players will actually build their own lightsaber as part of the character creation process. After creating your character, you select a saber hilt and blade color. The player will start the game with a single saber, but as the game progresses, the player will be able to learn new fighting styles and eventually earn the right to wield dual lightsabers (one in each hand) or a saberstaff (a la Darth Maul).

Q: What can we look forward to as far as combat goes?

A: With the variety of lightsaber types, each with its own special moves, and 16 force powers to choose from, you can have some battles that are, dare I say it, even more spectacular than in the films. Nothing is better than swinging your saber at a dark Jedi, only to have him use the Force to push you onto the ground, then you roll out of the way as he has leapt into the air to stab you, and you slice him before he can regain his footing and block you. It really makes you feel like a Jedi.

A: The player will be sent on various training missions for the academy, and before each mission he will be given the opportunity to choose a Force power from the light or dark side to train in. The player is free to choose what Force powers he wants, but ultimately he will have to make a choice as to which side of the Force he will fight on, and that will affect the outcome of the game.

Q: What are some of the force powers available to pick from?

A: The player will be able to pick from light side powers such as heal, mind trick, absorb, and protect, and dark side powers lightning, grip, drain, and rage. The neutral powers jump, speed, push, pull, sight, and saber throw will be available to all players.

Q: We know that Luke Skywalker will be present in the game, any other notable characters from the Star Wars Universe who might be showing up?

A: There are several guest stars from the films in the game. In one mission the player will fight alongside Chewbacca while investigating a smuggling ring. The others are a surprise…

Q: Can you explain a bit more about the unique tiered level selection?

A: Luke Skywalker will send the player on missions to further his or her Jedi training. The player will be presented with a series of missions to choose from, and can complete them in any order they wish. You pick the mission you want to undertake, the Force power you want to train in, and the weapons you want to bring with you. You can complete all of the missions available to you, or skip some (at the cost of the ability to gain or advance in more Force powers). At certain points you will advance in the Jedi Academy hierarchy and new missions, saber styles and weapons will become available to you.

Q: Will there be any noticeable differences between the PC and Xbox versions?

A: The X-box version will include all the features that the PC version does plus full X-box live support for online play, and splitscreen head to head multiplayer to fight your friends in person (-:

Q: What features made Xbox your console of choice?

A: X-box live ensured that we could bring the Jedi Knight multiplayer experience to the console audience, and the X-box had the power to recreate the high end graphics and special effects available on the PC.

Q: Will Jedi Academy support HD resolutions on the Xbox?

A: Yes, Jedi Academy will support 480p and widescreen.

Q: What are some of the Xbox Live game types available?

A: There will be traditional multiplayer games such as deathmatch and capture the flag. There is also our popular duel mode which allows players to have one on one lightsaber battles. We’ve also added a new “siege” gametype. Siege is a team-based game in which players fight for objectives on a map. Players choose a class of character to play, each with their own weapons and abilities (such as technician, heavy weapons, or Jedi), then try to control of the map. In the Hoth map for instance, it's Imperials vs. Rebels for control of Echo base. Another map is light Jedi vs dark Jedi for control of a Jedi tomb.