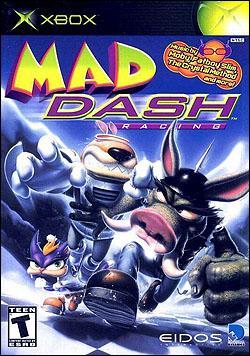 XboxAddict.com has a friendly little chat with the folks over at Eidos about their launch title on the Xbox console called Mad Dash Racing.


Q: If you could put Mad Dash in a genre, what would that genre be?

A: Mad Dash is definitely a racing game but the core of the game plays like a platformer. At Crystal, we have always been big kart game fans as well as platform game fans. We have spent many many hours trying to get the fastest time through one of the Mario or Crash levels. We wanted to create a competitive platform type experience in which multiple people could compete at the same time.

Q: Is the player able to affect or interact in the environment in any way?

A: We have a lot of hazards and moving objects in the Mad Dash environments that the players interact with. There are bridges that can be destroyed, traps that can be set and used against other racers as well as environmental hazards like lava, rolling boulders, etc.

Q: What kinds of power-ups should we expect to see?

A: We have several of the classic kart type weapons such as a heat seeking chicken, and powerups that allow you to steal an opponents weapon, or energy. But we also have a few that are a bit different. 1st we have the blob bomb, this powerup when activated gets launched into the air in front of or behind you, when the fire button is pressed again, it splits into 5 smaller bombs which then act as mines when they land. We also have a ribbon attack powerup that looks like something out of tron, the player leaves a flaming ribbon trail in their wake as they run through the level, allowing them to create an obstacle for the players behind.

Q: Aproximately how many characters will there be in the retail version?

A: There is a total of 15 playable character in Mad Dash, 9 at the start and 6 that can be unlocked as you progress through the game. The characters are broken up into 3 different classes, dashers, bashers, and gliders.

Q: What kind of multiplayer modes can we expect to see?

A: Mad Dash has a great VS mode that allows you to play split screen style with up to 4 people. Nothing beats a little close quarters smack talking.

Q: Is Mad Dash linear or are there no limits to where the player can jump and race through?

A: The tracks are designed to be somewhat linear but within very large environments. One of the things that we are most proud of are the number of routes, shortcuts, and paths through each of the levels.

Q: Will Mad Dash be updatable with new characters or add-ons to customize your character?

A: There are no immediate plans to support this.

Q: Could we expect to see Mad Dash characters migrate into other games, like a Kart-style game?

A: Definitely, the team has already starting talking about some of the possibilities for Mad Dash 2, who knows what could be next.

Q: Is there any sort of saveable replay feature included in the game?

Q: By your estimation, about how much power of the xbox does Mad Dash utilize?

A: This is a tough question to answer. In the end we were very impressed with the power of the X. Because the hardware was being developed as we made the game, we feel that there is still a lot of untapped potential in the hardware.

Q: By your experience, how hard was it to program for the Xbox console?

A: Microsoft was very easy to work with during our development process. The programming environment has been one of the best and easiest that our programmers have ever worked with.