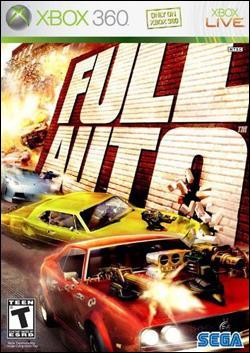 We got a chance to talk to the very busy folks of at Pseudo Interactive. The canadian based Xbox 360 developer has won numerous award for their innovation in new techonology. Their latest creation, Full Auto!


Q: What was the hardest part in making Full Auto?

A: I think the hardest part of any game project is contrasting all the things you want to do with all the things you actually have time to do. We were under very extreme deadlines throughout the production cycle, and knowing that we were creating a new IP, we had to jump on any and every opportunity to showcase the game--meaning demos, live events, and tons of PR and marketing assets. This really taxed the team since we were unable to focus solely on the completion of the game, although we had plenty of other challenges as well: doubling our team size, balancing racing and combat mechanics, working on changing hardware, etc.

Q: What makes this game stand out to other Car games that will be coming to the xbox360?

A: A much more detailed approach to track design, unbelievable destruction, the ability to turn back time via the Unwreck feature, intense online competition, exceptional presentation options, and big deadly weapons.

Q: Do you feel in making this game that it is really going to use the xbox360 power to its fullest?

A: Anyone who claims to be using the full power of the Xbox 360 at this point is flat-out fibbing. We've tapped into the 360 by utilizing threaded rendering in all 3 cores, but every developer knows that ongoing optimizations and updated XDKs will ultimately unlock the true power of the console. If you're blown away by any of the 1st generation software, you're going to cry home to mama once you see what the second phase is capable of. Such is the way of every hardware launch, and the Xbox 360 is no different.

Q: What time can we as the consumer expect this game to come out.

A: Full Auto ships into stores right around Valentines Day, just in time for your sweetheart to bring home some fun-loving automotive destruction.

Q: What are some of the stuff we can do in the game and does it use most of the buttons on the xbox360 controller.

A: I think left and right on the d-pad are the only buttons we don't utilize, but you'll be able to throttle, brake, unwreck, boost, fire and aim primary and secondary weapons, activate one-touch replay, take advantage of the hand brake, and switch between 4 main drive cams all from your amazing wireless controller.

Q: Do you feel that Full Auto can be a start of an original xbox360 series?

A: Without a doubt. We created the first Full Auto with it being a franchise in mind, and we hope to build on everything we've established with the first one while delivering all-new surprises in the future. There is no limit to what we might add or polish in future iterations.

Q: How did the name Full Auto come up and what does it mean?

A: It's a play on the idea of opening up "full auto" with a weapon and the notion that a "full auto" would indicate the ultimate combat vehicle. "Full Auto" was actually used as a code name for a project at PSEUDO Interactive as far back as 1999. Somehow, the name stuck around, and--in our opinion--the game we've created today for Xbox 360 lives up to its namesake much moreso than its predecessor.

Q: What will the cars look like? Will they be shiny and illusinating? What would make me want to but this game over PGR3 and NFS:MW

A: Our cars run the gamut of almost every major driving fantasy, but while they start out looking floor model fresh, they quickly disintegrate under fire, showcasing our amazing damage system featuring real-time deformation, awesome blast textures, shattered glass, etc. Once you add weapons to the mix, Full Auto really can't be compared to other driving games or the cars in their garages.

Q: Do you think that full auto may be the start to be what the twisted metal series was to playstation?

A: We've worked very hard to differentiate ourselves from both the Twisted Metal and Burnout series, although we fully understand the comparisons. We'd certainly welcome success akin to either of those series since they're both well-loved by the gaming public as well as here at our studio. That said, although we fuse the action found in each of those games, there is one direct comparison that I am willing to point out: where each of those series put a major dent in the genre with its first incarnation through innovative features and rock-solid gameplay, they both worked tirelessly to build upon that success and incorporate new ideas and amazing polish as the series wore on. We hope to emulate that strategy and push news boundaries as the Full Auto series continues.

Q: What was the motivation if not inspiration behind the making of the game?

A: I've talked about this irony before, but initially Full Auto featured amazingly destructive environments but did not include weapons. This made for spectacular wrecks, but players had no agency in tearing the world apart save ramming other cars and crashing their own vehicle. Our entire studio gets involved in the design process initially, and it was apparent that we needed to utilize all of our technology to make Full Auto great. It wasn't long before weapon designs from the previously cancelled "Vectorman" project found their way onto the hoods of our cars and a network & presentation time-control feature had found its way into the game with potential "do-over" functionality. We mixed many different ideas, but had to work diligently to gel them together and create the true character of the game.

Q: What will be some of the weapons for massive demolition?

A: There are eight weapons and each can be tuned at one of three different levels. They range from missile launchers, rocket launchers, machine guns, shotguns, grenade launchers, tank cannons, smoke screen, and land mines. The levels increase power but also can modify behavior: for instance, missiles fire straight ahead at level 1, are aimable at level 2, and have homing capabilities at level 3. We encourage gamers to mix it up and find the weapon and level combination that best suits their combat strategy.