It’s typically not a good idea to wander over to a bar and threaten patrons with a fake pistol as a way to promote something. And yet that’s exactly what happened on Friday night in New Zealand when an actor showed up at a Degree bar with bandages wrapped around his hands and a black imitation handgun, which he proceeded to point at the people drinking outside.
This led someone to shout, "He’s got a gun!" according to one witness, and in response, patrons began to dive behind tables, thinking the man had a real gun. "This guy with bandages on his hands pointed a gun at customers sitting outside," said Degree manager Steph Kurtovich. "They were pretty terrified"

The stunt was meant to promote Splinter Cell: Conviction but instead resulted in armed police offers showing up to confront the man, reports the New Zealand Herald (via Kotaku). They were unable to identify the weapon as a fake until they had it in their possession, making this a very dangerous situation.

The police later condemned the stunt, and two men were cautioned at the scene. Senior sergeant Ben Offner said, "We consider these types of stunts to be very ill-advised and have real concerns a similar one may one day end in tragedy."

Marketing company Monaco Corporation, which has also worked with Sega and THQ in addition to Ubisoft, claims that it hired a separate marketing company to organize the event and that it was unaware that a gun would be involved. Monaco marketing manager Duane Mutu said, "This was by no means an attempt to get cops down there and get this sort of exposure. We do apologize, we shouldn’t have had guns down there. It was just marketing gone wrong."

There were no details on who the second man was at the scene, whether it was a camera man or a Sam Fisher-type who was meant to save the day. Either way, he’s lucky he didn’t see the actor with the gun get shot by the police. 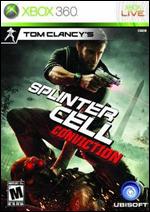