Fable Anniversary has been delayed until February 2014.

The HD remake of Fable 1 was scheduled to launch on Xbox 360 this year, but developer Lionhead says the game needs more time to be properly finished.

"We’ve been working hard for the past year to bring you the very best Fable Anniversary experience on Xbox 360,"explained lead designer Ted Timmins on the Lionhead blog. "We feel though, that we need a little more time in order to meet our ambitions and give you, the fans, the best game possible."

"I know I speak for everyone at Lionhead when I say that we can’t wait for you to see what we’ve been up to, and it gives us great pleasure to let you know that you can expect Fable Anniversary to be both on-shelves and online via the Xbox Games Store in February 2014."

"It’s not easy making these decisions and I know that us asking you to wait a little longer whilst we get to play test the game every day is downright unfair," added Timmins, promising that the team would release new media and "top secret announcements" for the game in the coming weeks.

Lionhead Studios is also working on multiplayer-focused spin-off Fable Legends for Xbox One. 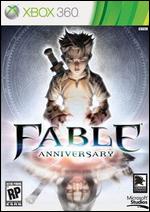