Yes, you read the header right, there is a new game available for the Kinect, and it’s called Air Guitar Warrior. What is this game you ask?

Divided into 10 albums and 16 environments, there’s Midwestern cornfields and Jurassic jungles, Vikings on the storm and demonic palaces. You can ride sharks with lasers, eagles, meteors, and jet-powered crocodiles, and face off against giant demon skulls and Heavy Metal Zeus in the Temple of the Rock Gods.

Your air guitar doubles as a weapon and an instrument. We use Kinect to detect strumming motions and measure the speed of playing, slow or fast. By moving your left hand along the air guitar’s neck, you can choose to play rhythm or lead; to aim, you tilt the guitar’s neck. Advancing in the game unlocks Bend Power, which lets you unleash rapid fire shredding by bending backwards like you’re playing the greatest solo on Earth.

By using these five playing styles, you’re controlling the music itself! Each style changes what the lead guitar plays. The dev-team had two amazing guitarsts, Samppa Siurala and Mika Tyyskä (aka Mr. Fastfinger) create 19 tracks for the game, ranging from blues rock to hard rock and heavy metal — and every track has five layers of guitars, from fast to faster and fasterer.

The playing styles also make your guitar weapon use different fire modes. Slow Rhythm is great against packs of enemies, because it’s powerful and has a good spread – but you need to have good timing. Fast Rhythm is a good balance between firepower, speed and spread. Slow Lead is powerful but needs careful aiming. Fast Lead is weak, but you can fill the screen with bullets, so it’s great against lots of enemies that are spread out, as well as bosses.

There are seven different guitars, each of which has four kinds of bullets with different tactical uses. The game has guitars like the Spectral Axe, which shoots tiny spinning axes and the ghosts of Viking rockers past, and the double-necked GTR-8000 which fires lasers that pass-through enemies in a line. Finally, you’ll unlock the legendary guitar-sword, which you can customize by choosing bullets from other guitars. 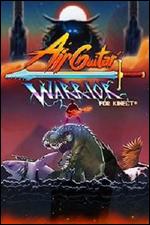