Aweseomnauts Assemble Gets a Big Update

Awesomenauts Assemble! has just received a massive update on Xbox One. Update 1.7 contains gameplay content spanning more than a full year of development and brings players six new characters, 18 new skins and announcers, and numerous gameplay improvements and balance tweaks. Yep, that is a lot of stuff.

This update brings the console version of Awesomenauts up to speed with the Steam version in terms of gameplay content, and is the biggest update the dev-team has ever done on any platform. Of course, the dev-team is said to be quite excited to introduce to the fans playing on console the following characters:

New ‘Fully Loaded’ bundles are available on the digital storefronts that include the base game and all available characters. Players looking to unlock just the four new characters from the ‘Rocket’s Renegades’-storyline can pick them up in a discounted bundle, or purchase them from the store individually.

On top of these new characters, the game is also bringing a whole bunch of new skins and announcers to consoles with this update, including the shanty-singing Scourge Captain McPain skin and Soulhuntress Raelynn, a long awaited new costume for the fan-favorite sniper.

Awesomenauts Assemble! Update 1.7 is now available for all players on Xbox One. The game launched on September 2016 on Xbox One, and the dev-team has stated that they are excited and proud to keep the game going strong for so long. In fact, even more content is coming almost six years after the game originally launched on last-generation consoles, so sit back play the new DLC, and see where and when more DLC hits. 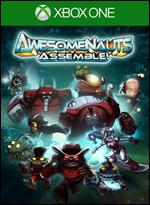