Acclaim Entertainment has announced that it plans to expand its Acclaim Max action sports lineup with the development of Chris Edwards Aggressive Inline for current and upcoming consoles. The game is being developed by Z-Axis, which is also responsible for Acclaim’s Dave Mirra Freestyle BMX line of games. The game, which stars Chris Edwards, the founding father of aggressive inline skating, features interactive environments filled with pedestrians, traffic, and a variety of ramps and obstacles. Aside from Edwards, high-profile professional inline skaters such as Taig Kris, Jaren Grob, and Shane Yost will be available in the game.

"We are thrilled to expand upon the breadth of our diverse product offerings from the Acclaim Max action sports brand and once again work with Z-Axis to deliver another benchmark title in the genre,’’ said Steve Felsen, senior brand director for Acclaim. "With nearly 30 million inline skaters in the United States and more than $250 million generated in revenues annually from equipment manufacturers’ sales, Chris Edwards Aggressive Inline is a perfect extension of our extreme sports portfolio.’’

Chris Edwards Aggressive Inline will be available in the summer of 2002 on all current-generation platforms.
Source: http://www.acclaim.com/ 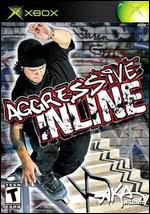