If you are a real time tactics kind of gamer, then we have some news that should fall into your interests. Kalypso Media’s World War II real time tactics game, Sudden Strike 4, rages into the Pacific with The Pacific War DLC pack, available now for various platforms, including the Xbox One.

If the name of this game doesn’t ring a bell for you, Sudden Strike 4 puts players in the commander’s seat across extensive campaigns set amongst the unforgiving battlefields of World War II. Along with a deep single player mode, Sudden Strike 4 includes challenge-focused skirmishes and multiplayer matches where players around the world face off. Previous DLCs include The Road to Dunkirk, Finland: Winter Storm and Africa: Desert War.

So, what about this new DLC we mentioned. Well, along with introducing a new theatre of the conflict, The Pacific War DLC features ten missions set across two campaigns. Players will have access six new commanders including the Imperial Japanese Army’s Admiral Soemu Toyoda, the Southern Expeditionary Army Group’s Hisaichi, Legendary five-star US general Douglas MacArthur and Chief of Staff Richard J. Marshall.

Finally, in addition, update 1.15 has also been released today for the main game, which introduces three new bonus missions completely free of charge. 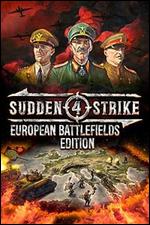