Building upon the proven success of its premier extreme sports franchise, Acclaim Max Sports, a division of Acclaim Entertainment, Inc. today announced it will release Dave Mirra Freestyle BMX 3 in the fall for all of the next-generation hardware platforms. Currently in development with Z-Axis, the creative team behind the 2.8 million unit selling franchise, Dave Mirra Freestyle BMX 3 will feature 10-time world champion and 13-time X Games champion, Dave Mirra, and 16 of the best street, vert, dirt and flatland riders in the world.

"The Dave Mirra brand is the number one BMX franchise in the world across all platforms and continues to set new industry benchmarks with each release," said Sarah Anderson, Senior Vice President of Brand. "Dave Mirra Freestyle BMX 3 will take the BMX genre to new heights and strongly appeal to the rapidly expanding mass-market consumer audience."

Dave Mirra Freestyle BMX 3 will offer many exciting new features, including all-new motion captured rider moves, more than 1,700 tricks and 10 highly expansive and immersive environments. The game will offer a revolutionary Create-A-Rider system, which will allow players to create their own rider and BMX bike to utilize throughout the game. Dave Mirra Freestyle BMX 3 will also offer a dynamic in-game soundtrack, featuring some of today’s top recording artists. In addition, Z-Axis is also developing the Company’s Chris Edwards Aggressive Inline title, which will ship in the spring across all of the next-generation systems.

Dave Mirra Freestyle BMX 3 will be available in the fall of 2002 across all of the next-generation platforms. For more information regarding this title, as well as Acclaim’s entire 2001 holiday season lineup, visit www.acclaim.com.
Source: http://www.acclaim.com/ 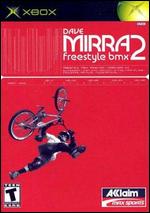