"Bringing an exclusively licensed World Wrestling Federation title to Xbox is a continuing example of our commitment to delivering exciting and unique games to new platforms," stated Michael Rubinelli, vice president, product development, THQ. “WWF Raw utilizes all of the technology of the Xbox by bringing realistically depicted models, authentic signature moves and smooth character animations to one of the most powerful gaming systems available.”

“Fans of the World Wrestling Federation have been awaiting the arrival of a title just for the Xbox,” stated Nelo Lucich, director of interactive, JAKKS Pacific. “We are confident that WWF Raw will live up to all of the anticipation and expectations set by the fans and begin a new tradition of excellence for World Wrestling Federation games on Microsoft’s next generation console.”
Source: http://www.thq.com/ 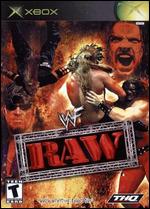 Xbox one no signal
Post by debrartin
0 Replies, 26932 Views