There are now two ‘Full Auto’ picture packs on the Xbox Live Marketplace. This content is 100 points for each picture pack and is available in all Xbox Live regions.
Source: http://www.xbox.com 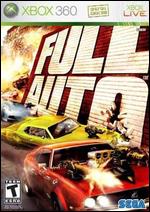