Sega is officially shutting down Chromehounds’ online component, putting an end to the brief, troubled life of the online mech sim. Fans have until January to make their final runs, and bid goodbye to their squadmates.
"We regret to inform everyone that the Chromehounds online service will be closing on January 6, 2010. At this time, all online components for Chromehounds will no longer be accessible and the game will only be available for play in offline modes," Sega said in a post on their official forums.

"We would like to thank everyone in the Chromehounds community for their passion and support over the past 3 years of service. Please enjoy the remaining time with the game."

Chromehounds was released back in 2006, and its fans have had to suffer substantial network problems ever since. Nevertheless, it managed to pick up a small, dedicated following, many of whom expressed regret in the same forum.

If you’re part of that dedicated following, you’d better get playing. You only have until January 6 until Sega turns off the lights for good. 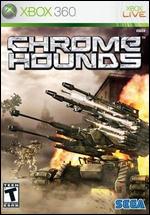