TEKKEN 6 sees the return of many familiar faces and new characters to create the largest line-up in franchise history. Recreate the arcade experience at home by battling friends or AI-controlled opponents while amassing a wealth of items for customizing and strengthening characters in different modes including Versus, Time Attack, and Survival. Featuring dynamic and destructible environments, players will be able to test their virtual might by punching their enemies through concrete walls or kicking them through floors to open a whole new battleground. New to the series, the Scenario Campaign mode will allow players to progress through the story and mow down hordes of enemies while still enjoying fighting game action.

With full support via the PlayStation Network and Xbox Live online entertainment network, TEKKEN 6 includes a multitude of online features. Players can vie for global domination or just improve their fighting skills by battling opponents worldwide in online versus mode. Create and upload customized ghost characters, which replicate a player’s fight style, so any competitor from around the world can download them for one-on-one battles. Also an online co-op update for the game’s Scenario Campaign will be available this winter as a free post-launch downloadable content. In this mode, two players can jump into intense campaigns against AI controlled enemies and experience the dramatic large-scale action with friends around the world.

"TEKKEN 6 is the pinnacle of the long running King of Iron Fist Tournament and without question, delivers the best of the entire Tekken series", said Todd Thorson, director of marketing and public relations at NAMCO BANDAI Games America, Inc. "TEKKEN 6 is the culmination of Namco Bandai Games unwavering commitment to excellence which has resulted into the ultimate fighting experience with amazing detailed graphics and robust online gameplay."

TEKKEN 6 is rated "T" for Teen by the ESRB and carries a MSRP of $59.99. A premium wireless fight stick bundle will be available for $149.99, while supplies last. For more information on TEKKEN 6, please visit: www.tekken.com or www.namcobandaigames.com 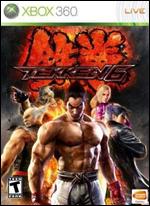