Electronic Arts on Monday made official rumors that it was planning to advertise its forthcoming action game, Dante’s Inferno, during the television broadcast of Super Bowl XLIV this Sunday. Typically, networks charge an exorbitant amount of money -- not hundreds of thousands, but millions -- for this privilege.

The good news is that you won’t need to wait out the weekend to see the ad because we’ve got it for you today -- in this very article, in fact.

To complement the commercial spot, we chatted with EA’s senior vice president, Nick Earl, who heads Visceral Studios, the developer responsible for Dante’s Inferno. The company clearly has a lot riding on the title and the future of the franchise, which it hopes will explode after a third of America’s total population has a look at it this weekend.

We’ve really pushed the envelope in some of our marketing vehicles and at some of our events," Earl said of Dante’s Inferno. "With the Super Bowl, you’re reaching potentially one-hundred million people so you need to be thoughtful about that audience. This is the first Super Bowl that EA’s run. We think it may be the first videogame ad in the history of the Super Bowl -- certainly in recent memory. So we’re being very respectful of this opportunity. It just doesn’t happen often."

As you might’ve noticed, the spot does not depict the excessive gore, as well as nudity and sexual themes found in the game, but is nevertheless very ambient.

"We’ve created what we believe is an absolutely gorgeous looking ad with just incredible visuals and very arresting music to go along with it. So I’d say it’s going to be memorable because there’s just a tremendous juxtaposition of the audio in particular with the visuals," said Earl. "But I think at the same time we’re being respectful to the franchise and the work of literature and we’re being respectful to the audience." 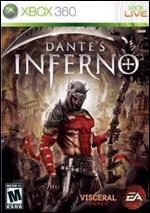