Fable III will present three key changes in play: In-game touching, highly-customized weapon morphing and the challenge of ruling a kingdom. Molyneux demonstrated the game for Kotaku and other reporters at Microsoft’s big X10 showcase in San Francisco. The event highlighted the Xbox 360’s biggest 2010 games.

"You will start out the game as the 18-year old [child] of your Fable II character," Molyneux said. "You’ll find that Albion is being ruled by a tyrant. You are going to storm the castle with all of the people who follow you you’re going to take him down and then people are going to come to you and say, ’You promised you would eradicate slavery.You promised turn factories into orphanages. You promised to stop childhood labor’.

"We are going to make your time as a ruler a little bit tough."

Fable III will also include a major overhaul of the on-screen user interface. Molyneux said that he looked at first-person shooters for inspiration, admiring the way they can give information without numbers or graphs.

The look of Fable III we were given featured a screen entirely devoid of icons, maps or bars.

Fable III won’t display experience points, Molyneux said. Instead your experience is shown by the number of followers you have, something dictated by your skill as a hero, a combatant, a ruler and a promise keeper.

Forget about a health bar, too. "We made the health bar one pixel and we thought, ’What are we doing man? No one is going to do that. Let’s do what shooters do so well and make the world your health bar,’" Molyneux said.

The importance of context will also play a role in how you interact with the game’s other characters as well, Molyneux said. Players will guide Fable III’s hero, perhaps with wife, children and, yes, a dog, through the game, using a new context-heavy system that focuses on the player’s character grabbing hold of non-player characters to interact with them.

The play mechanic is in part inspired by Ico’s hand holding, Molyneux said as he pointed to the screen at an image of a young man running through a cobble-stoned street to a house.

"I live here with my wife," he said. "We allow you to get married again. You can have children again and a dog. The dog is much more dog-like... make sure your dog never sees a rabbit. The dog in Fable III hates rabbits."

The scene on the big screen television then shifts as the character runs through the town, following his dog as he "is scenting" your daughter.

Molynuex explains that his in-game wife is worried that their daughter has been kidnapped and has asked him to go get her.

In the live presentation, Molynuex’s character finds her playing with other children in another part of town.

You can still use the directional pad to choose facial expressions to decide how to interact, in this case deciding whether to praise or scold your daughter.

"You tell her off and now we can take her home," Molyneux said. "In Fable II you press the A button. In III you use a trigger. When you press the trigger the most appropriate thing happens. This time you comfort her because she is upset. You pull the trigger again and you take her hand and guide her."

On the television the hero, holding his young daughter by the hand, gently leads her through the street.

"This is using all of our AI because it is highly context-sensitive," he said.

On TV, the hero tries to lead his daughter to a pub, but she pulls back, pointing out that her mom, your wife, had asked you to stop going to the pub.

"In creating this system I thought, how can I use touch to increase the drama. of a moment, especially if someone pissed me off," he said.

That could be done, Molyneux says, by allowing you to grab someone by the scruff of the neck and drag them down into your dungeon and throw them in.

Molyneux’s character then walks up to a homeless man and takes him by the hand. The man follows, saying that he thinks he’s taking him home for a dinner. Then the man stops in his tracks as they turn a corner and a factory looms ahead.

"We’re going to sell him to the factory," Molyneux says.

The man, visibly frightened, begins to pull away, but the character continues to drag him to the factory.

The homeless man begins to beg, "Don’t sell me to those fiends. You might as well put a bullet in my head."

Molyneux says all of the contextual touching will also work in cooperative modes, allowing you to interact with other players in the same way.

The co-op will also allow you to separate in game, he said.

"You could go off earning money, while I go off to kill people," Molyneux said. "It’s a true co-op experience."

Another major new feature of the game is a tweak to morphing.

While a character’s look will still morph to suit the gamer’s play style, the way it happens has been completely overhauled. The game will also apply morphing to your weapon.

"Weapons morph from boring things when you first pick them up to really interesting things depending on the way you use them," he said.

The color, texture and what’s written on them is controlled by what you kill with them. The size and length, sharpness and curvature is dictated by how often you fight and the duration of those battles. Whether a weapon drips blood or glow depends on if you kill innocent or evil people.

Finally, all of that is blended with your actual Gamerscore to create your weapon.

"So your weapon is completely unique to you," he said. "You can trade your weapon if you like. There will be thousands of totally unique weapons in the game.

On screen, characters fight in caverns, the dungeons of Fable III. One begins to glow, sprouting fiery red wings and horns as he swings a sword into people. Another character sprouts glowing blue wings.

Another character hoists an axe straight up in the air above his head, spinning around twice before leveling the axe and tearing into an enemy.

While the ability to rule kingdom and act on your impulses, for the good or the bad, is an important part of Fable III, it only comes into play about halfway through the game, Molyneux said.

And don’t worry, he added, it won’t make the game a real-time strategy title.

"I love the idea of the map in an RTS," he said. "But I don’t want the mechanic of an RTS, all I want is its sense of power."

One way Fable III does that is by allowing players to pass judgments as law, changing the fabric of the kingdom.

"Conventionally, a game is all about a hero’s journey," he said. "You start weak and build up your power, take on the bad guy and then the credits roll.

"We decided why stop there."

Key to the second half of the game is carefully balancing your need to attract followers with promises, and the followers insistence that you keep your promises.

"On the journey to becoming king... the temptation is to promise everything," he said. "Then you become king and you realize, ’Oh $*** baby, this is not so simple. 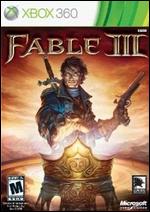