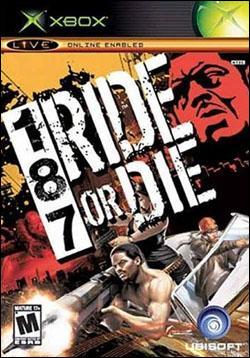 187 Ride or Die features the voices and likenesses of rising young actors including Larenz Tate (Menace II Society, Ray), Noel Gugliemi (Training Day, The Fast and the Furious), and Guerilla Black. 187 Ride or Die tells the story of a reluctant urban hero named Buck (L. Tate), a young man living a thug's life seething with money, fast cars and beautiful women -- with danger lurking around every corner. Set in the underworld of Los Angeles, Buck must defend the territory of his mentor Dupree (G. Black) from a menacing nemesis and his gang of bandit roughriders, led by Cortez (N. Gugliemi), who are determined to take control of the streets.
Score: 55
Overall User Average: 5.50 / 10 (55.0%)
Gameplay User Average: 6.50 / 10
Graphics User Average: 7.00 / 10
Sound User Average: 6.50 / 10

Overall: Ride or Die is a game that should have focused less on exuding street cred and more on gameplay. Larger, more varied race courses and greater differentiation between the weapons would have gone a long way towards making this game more enjoyable. Midway Arcade Treasures 3 comes out in September and includes a full version of San Francisco Rush 2049. Twenty minutes with that classic game is all it takes to realize that the concept behind 187 has been done better many times over. Don't be blinded by the bling, 187's poor track design and loose controls will at best provide a weekend's worth of entertainment.

Gameplay: Both driving and shooting feel loose and unresponsive, the track design doesn't help. Very boring to play.
Graphics: Everything in 187 is shiny or glowing. The game glistens like a freshly waxed, chromed-out escalade.
Sound: A good soundtrack, a terrible script, decent sound effects, repetitive blurbs of profanity make this both ad passable and an awful game in terms of audio.

Overall: I think the game could have had some potential but it was so overdone in some areas and underdeveloped in the gameplay that it just wasn't a good game to play long term. So I really wouldn't recommend this game other than if you were at a friends and wanted to try it out. That's it though.
Gameplay: The game was fun to play when I first picked it up. It was exciting and fun to shoot, drive, take things from other cars (road rage style). But, it got old after some time and I just didn't have any desire to play the game again. It is simple to play but I would only rent this game and not buy it at all.
Graphics: This was the only thing in the game that was done well I think. It resembled NFSU2 look when driving down the streets but it felt like the same street over and over and over. The cinematics looked nice but nothing really too great. Still, it was nice they had them instead of crappy movies.
Sound: The sounds added to the game with the decent sounding shots and things that went on with driving but the lingo used was so annoying. It was non stop stereotypical gansta slang people would suspect to hear but it was so over done it was rediculous.

Best of Platinum Hits Program
Pick up your favorite Xbox games at a mear $9.99, check it out.
Judge Blocks Illinois Violent Game Law
Finally, there is someone out there who understands where us gamers come from. Remember parents and politicians, Rockstar doesn’t raise children parents raise children.