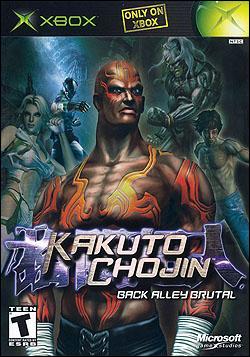 Kakuto Chojin is a bizarre game. It plays and feels like an unfinished product that did have some potential. The characters are fairly generic, but they look very good."

read more
Kakuto Chojin literally translates to "hand-to-hand fighting superman." It's a gritty street fight. Dark, edgy, and mysterious battles take place in back alleys and on rain-soaked rooftops. Combatants fight with raw emotion using their own styles. There is nothing cute, comical, or cartoon-like about these battles. It's a life-or-death fight for survival. When a fighter strikes, his or her opponent will know it. Kakuto Chojin represents the next level in street-fighting realism.
Score: 65
Overall User Average: 6.67 / 10 (65.0%)
Gameplay User Average: 6.22 / 10
Graphics User Average: 8.56 / 10
Sound User Average: 6.11 / 10

Overall: Despite having some superb graphics, and some really good musical scores, K(f)C doesn't have good enough gameplay to be a worthy buy.
Gameplay: Too simple, gets repetitive, some characters seeme to be too good, but that might be good. There aren't really any combos to speak of, but well there are, just not enough. Animation could be 'a little better' but overall its acceptable. It's a Rent at most. =
Graphics: Crazy insane, very good looking textures, and the PolyCount isn't too shabby eithor. Nice shaddowing effects.
Sound: Damn good music, voice acting is good, but it doesn't match the mouth much at all (were they trying to?). Sound effects suck.
Suggestions: This game could have kicked some serrious ass, if they just spent more time on some key areas (like gameplay).

Overall: Do I really have to explain why I think this game should have never been created? Because I really do not think that has to be done.
Gameplay: Ummmm. It was like swimming through a bucket of allready chewed bubble gum. I think watching paint dry would be better.
Graphics: Great like all Xbox games but like most fails with what does count and that is game play. It makes me sad.
Sound: There was sound? I never even put enough time into the game to enjoy the quality of the sound. maybe if a friend accidently buys it then I will check it out.
Suggestions: nope

Overall: This fighting based game was recalled supposedly for being "too brutal" and what not. Well in fights characters bones snap, necks break, spines crack, bones fly, blood splatters, water drips, and cuts open. All in all, a very fun game when playing against friends!
Gameplay: The challenge factor of this game is very low. Computer opponents give little or no challenge and can easily be beaten upon a second try. The best way to experience this game is against a friend!
Graphics: If fighting and "brutality" are this game's strong points, than graphics are one of it's two weak points. The arena's are pitiful, enviroments are very sketchy and are not interactive, although, characters/fighters do look GREAT, and the effects are very nice!
Sound: Sound is the 2nd weakness of this game. There is one song that plays in every battle, and it's a simple instrumental loop. The best decision for the gamer is to mute soundtrack and put on their MP3's in the background on their computer!
Suggestions: Should have worked on it longer, focused on better enviroments with active elements(bricks break when kicked, windows shatter, walls fall, dust will fly, if a pole is tip than lights go out, etc). They also should have worked on better sound/challenges.

Overall: I was surprised when i played this game it filled my addiction to fighting games, i love fighting games there my favorite Genre and this game boosted it a good 10%
Gameplay: The gameplay is pretty strait forward no need to say anything special other than its fast paced fighting not meaning button slapping here another thing is the game is a medium difficulty the controls were'nt hard to figure out it took me about 1 minute.
Graphics: The graphics were beautiful the characters, backgrounds and even more were visually stunning i mean jaw dropping you don't belive me ask the other reviewer that mentioned graphics.
Sound: The sound wasn't really mouth opening good just good enough to draw actual fighting realism the music was lame not the best they could of worked on that more.
Suggestions: Keep up the good work and make a good series but work on the music a little more.

Overall: I'm afan of fighting games, and Kakuto Chogin is far superior to the other games recently released. Much better than Mortal Kombat.
Gameplay: When I first started playing, I thought that the fighting system was very inferior and shallow with few combos, etc. Further examination reveals an intricate and delicate fighting system that requiers precision in moves and combos. The linked fighting styles with combos is very tricky to get the hang of, but once you do the gameplay is as fluid as DOA3 (not choppy like MK)
Graphics: There's just not enough to say about the graphics. The characters do seem too small on the screen and definately a rip-off from fight-club, but still very beautiful models, skins & lighting
Sound: Er, so the game sort of falls flat on sound. There isn't a good background soundtrack, and realistic fighting sounds just suck. More 'unnatural' fighting sounds would be good.
Suggestions: Better sound as mentioned above, more in-depth characters and unlocking. A better 'command list' option (training in DOA3 was a good start, improve on something like that)

Overall: I love this game. It feels a little different from the fighting games I'm used to playing. But after getting the hang of the fighting system, I just couldn't stop playing the game. This is one of the best fighting games that I've seen in a while. Believe me it is.
Gameplay: This is probably the most realistic game that I've played since virtua fighter 4. In fact, this game is actually more realistic. Every punch and kick look like real martial arts moves. And every attack looks hurtful. This is a hard game though. People expecting the game to be like doa3 or soul calibur may get turned off when they play this game. For one reason, this game is not an extremely fast paced button mashing game like doa3. Kakuto Chojin actually requires some strategic fighting. This is an incredibly deep fighting game. Plus some moves are hard to do. Also, the computer begins to block your moves later on, especially when the game is put on hard mode. I found myself having to out think the computer a few times. But I like the way the game was approached. It feels very real. I espcially like the way the fights end. When the final hit is thrown, the game moves slowly and the camera turns around showing the angle of the kick or punch and the enemy falling down. And it makes a lot of sense.
Graphics: This is the best looking fighting game ever. No other fighter compares to this game in terms of visuals. None. Doa3 was the best looking fighter in town, but now it looks watered down. I made a funny. If you don't believe me, see the game yourself.
Sound: I love the sound. Some attacks sound like claps, but for the most part, they sound hard hitting. The way the fighters yell and moan when they get hit actually fit them. And I love the music. They fit the areas that the players are fighting in.
Suggestions: My only beef with this game was that they're not enough throwing moves in it. Also, I would've liked to have seen some wall slamming too. But still, this is an excellent game. You should definately make a sequel.

Overall: Buy it used somewhere or rent it, it may be worth THAT, but certainly not a new purchase! (At least until a considerable price drop!)
Gameplay: There was no appeal for me! I LOVE fighting games, and when I played this, I was utterly disappointed!
Graphics: The graphics were beautful! I have to give KC its props! The graphics were incredible! Great lighting schemes, great textures, and all at a steady 60 fps! - The animation on the other hand needed work!
Sound: Anyone who ever owned an Atari Jaguar will remember the even-now haunting sounds of the words being muttered ... "Kaaaaaasumi Ninjaaa!" - Well, guess what? This game goes "Kaaaaaaakuto Chooooojin!" - It was like a bad dream! - And what's with the little to know voices??? We ARE working with DVD's, right?
Suggestions: Take a look at REAL fighting games and revamp the whole system, keep the graphics, and frames of animation, and please, God... Get some friggin' Voice Actors!!!

Overall: I've been excited about this game since it was first announced, mostly due to the 4 player mode. Unfortunately aside from that mode this game is totally unappealing to me. While it seems to play slightly better than Xmen:ND it's not even close to DOA3 or Soul Calibur (DC).
Gameplay: Fighting system seems fairly shallow. Needs more moves and an in-depth counter system. Not enough characters. Arenas are boring .. just plain boxes with the occasional spot for a ring out. That may have cut it on PSX1 but it does not anymore.
Graphics: I guess this game is at least sylistic if not realistic. If you like the character style (which I don't) then you may very well love the game. The only reason it gets even this high a score is due to some great effects programming. Lighting, reflections, lens flare and particle effects all look great (except the molten metal sparks look a bit fake on bounce). Character models are somewhat comic-y but not to my taste. Most of them have huge bump-mapped muscles that don't deform in the slightest, and they are covered in a reflective coating (supposed to be sweat I guess) which lends to the impression that your fighter is wearing a shiny plastic 'muscle suit'. There are frequent jaggies in the backgrounds. Character animations could use some work, and there is often horrible clipping especially on the finishing attack. Take away all the fancy effects and this game is not up to next-gen standards.
Sound: Nice metal soundtrack. Good fighitng music. I hate most game soundtracks but was pleasantly surprised here.
Suggestions: Maybe 6 months to a year of extra development would have yielded better results.

Overall: Xbox pushed the graphics to the limit with this game.All the pepole look real and the cpntrols are great with a nice fighting system.
Gameplay: The game play is very smooth and doesnt give u a hard time to control.It has a 4 player battle royal that will before to keep you on your feet.
Graphics: WOW!the graphics on this game are the nicest i've seen since DOA.The lighting on this game out does any other game you've ever played.Amd trust me i know my games this makes 80 in my collection and thats just xbox games.
Sound: The sound is nice there isnt really nonthing to special to expect.But the voices and the sounds when they do the moves are nice also.
Suggestions: All this game needs is more ppl and some finishing moves.Because the game looks to good not to any fatalites it'll look like there finishing a real person.


See News Archives
Important! I pay $ 1000! I search the Sweden launch and the Element 54 Faceplate
Post by Smill
0 Replies, 6433 Views