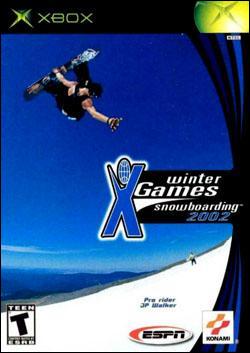 Boarders (a cast 13 of the top snow boarders including Todd Richards) can pull off quite a few tricks, from Back-flips and Mctwist 720s to Stale Fish Airs and nose grabs and several different grinds. The trick system itself is considerably simple. Thanks largely to the fact that players can pull off combo-tricks."

Overall: This game is highly underrated. It does not follow any Tony Hawk formula or anything. It is A little hard at first and might seem sub par but after playing it, especially in the snowboarder mode, You can have great fun with it.
Gameplay: It does well in this category. It has a good learning curve. You cannot just pick up the game first time playing and do a rodeo 540. You have to play and learn how the game works in order to get better. It has several modes you can play in including XGames mode and Snowboarder mode. Snowborder mode is a mode like the Careeer mode in Amped but way more deep. The sponsorship is a lot more realistic in this. You can only have one sponsor at a time for a certain item of snowboard gear. Say for a goggle sponsor you have Dragon, Snowboard you have Forum, Boots you have Northwave, Bindings you have K2 and clothing you have Foursqaure. Each of these sponsors picks you up for a different reason. One might like the way you Grind and another may like your huge airs. You can also be dropped by anyone of these sponsors after a bad performance or a couple bad performances either in a contest you entered or a video they asked you to do. You will eventually be recognized by ESPN as a top snowboarder and be invited to compete in the Xgames. In order to play in the xgames you go to the xgames mode which was already opened except now your character is included with the other Real Life Pros who you could choose form before. The levels, for the most part, are well laid out and fun to play on with lots of rails and jumps to hit. There are also halfpipes and quarter pipes which can help you get bgger scores as you can air off of them more times than a jump. The scores you get for rails are usually lower than a score you would get for doing an air. This is justified as in real life rails are super easy. Also in real life in the xgames they dont seem to hand out very highscores for rail tricks, most likely for the reason previously stated. The third factor for rail scores and probably most important is the fact that as long as you hold the grind button you wont fall off. You can stay on a rail for the hole thing with no balancing as balancing was not incorporated into the game. However if you let go of grind then your player will slip off of the rail. You can do a very wide vcariety of tricks in this, including making your own up. You can also do realistic tricks in this that look cool. Unlike in Amped where if you do a realistic trick it makes your character look like a wuss. There are a variety of grabs and some characters have different ones than others as well as grabbing the same trick different than another character. Also you will land or grind a rail different depending on how the trick was excecuted. There are many factors in this game that give it a great gameplay appeal.
Graphics: Visually this isn't stunning. While clean and crisp images they are subpar being at the PS2 level. The player models are decent rivaling those in amped but the snow texture is horrible and sometimes you cannot see how close you are to the ground or where a bump in the ground is. Overall the graphics are only around average.
Sound: Music choice in this game was horrible in my opinion and it is a shame that they did not include the soundtrack feature. Other than that there is nothing to really gripe or praise the sound about. They have announcers who comment on your tricks and sometimes it can be entertaining but it doesnt really get annoying. It has the expected landing, and carving sounds as well as the player grunts and exclemations.
Suggestions: Upgrade the game for xbox. It could have been quite a bit better in the graphics and sound department. Not to mention that you should be able to play with 4 people. Think outside the Station and venture into the Box.

Overall: ESPN Snowboarding doesn't come close to meeting the expectations that it set forth. With powerhouses appeals like ESPN and the X Games behind it, it still doesn't come close to Amped, and it fails to make a draw for itself in the rising market of snowboarding games out. Bottom line: Don't buy this game, particularly if you haven't played Amped or SSX yet because those titles beat ESPN easily.
Gameplay: The gameplay was one of the worst aspects in my opinion. The controls are hard to get used to, and in general the game just doesn't seem to respond that well to what you're trying to make it do. Especially bad is the turning, you can't cut at all, and even regular turns are hard to control. The jumps don't have much lift from them and the tricks weren't that impressive from what I've seen so far. The career mode had some good ideas and its very extensive, but at the same time the way that its laid out so much makes it annoying and it gets old fast. The main thing I want out of a snowboarding game is to actually snowboard, not to spend my time shopping and getting emails and hospital bills.
Graphics: The graphics are average to below average. Mainly, I say this after seeing much better on a game like Amped. After playing Amped, its clear that the developers of ESPN Snowboarding didn't take the time nor the effort to meet the market standards. Once again, if you want graphics, go to another source because you won't be too enthralled with this title.
Sound: The soundtrack features mainly punk bands, the most well known being the Offspring. This is pretty typical for a snowboarding game. The game sounds weren't anything special. There is an announcer who says things like "There's a big bump coming up," which at times can be helpful when you first start off but wears old soon after. Overall, the sound wasn't horrible, but they certainly didn't strive to do anything special with the sound effects and its not good enough to cover up for the other deficiences found in the game.
Suggestions: If you're going to use the ESPN and X Games names, then at least develop a game that is worthy of their name. This game didn't thrill me at all, the gameplay, graphics, and sound all need improvements if you are to compete at all with other snowboarding games out there. I did enjoy the multiplayer feature with split screens, and the snowboarding highlights are certainly a plus. But when I buy a snowboarding game, I'd rather be playing a great game then watching real footage of someone snowboarding.

Overall: Take 2 parts Amped and add 1 part SSX Tricky. What do you get? A game that doesn't quite live up to either. As my friend put it, "Why am I sitting here playing this when I could be playing Amped?"
Gameplay: This game attempts to use the real-world physics and realism of Amped and the racing aspects of SSX Tricky in varying events that will (hopefully) lead you to the X Games winner's circle.

You start out as a no-name kid in a small town, with only 1000 G's (no, not thousands of dollars.... it's the in-game monetary system) to buy upgraded equipment. By entering Events, which can be free or not, depending on the level you enter, and placing in the top 3, you can earn more G's, and enter more contests, buy better gear, etc.

The events are varied. Some have you competing in Slopestyle to earn the most points. Others have you racing to the finish line to get the best score. While others still allow you to earn passes to travel to other locations for more events.

The goal is to win events, gain sponsers, and end up in the X Games competing for the Gold.

Tricks are fairly easy to pull. Using a combination of A to ollie, Y to Grind, and in-air combos or all the buttons and triggers, along with the stick to rotate and flip, you pull off moves in a very similar fashion to that of Amped. This game does not go for the SSX Tricky over-the-top style of gameplay. And, for added "realism", you have a health meter that, when it reaches Zero, requires you to go to the "hospital" for treatment (bleeding you of your hard-earned G's). So, make sure you pull off your tricks!

The multiplayer also has you competing in slopestyle and racing events. Good vertical split-screen competition allows for 2 boarders to play at the same time, whether it's a race or a slopestyle event.

All these interesting twists on a familiar genre, though, still does not bring the game up to par with the current competition. The graphics are sub-par, and the interest in continuing in career mode is weak, at best. It's annoying to have to "Sign Up" for each even that you want to compete in. Also, to practise a course takes 1 Day, and events happen on scheduled days so that you have to compete in them or lose the opportunity. While this, and the injuries, add realism, it makes it too mundane (like real life) to be any fun.
Graphics: The graphics try to be realistic like in Amped, but they fall a little short. The textures are just plain, with no real detail. I've misjudged a few jumps due to not being able to see where the ground was in relation to my boarder. The boarders are plain (but can have a variety of clothing) and when they fall, look like a manakin being pushed down a hill. Clipping issues exist in a few instances, too. Looking at this game makes you wish you were looking at Amped instead.
Sound: The sound is decent, but not great. Sounds like a snowboarding game. I was not able to discern if the Dolby Digital 5.1 was really working, or if it was just a Prologic mix. The music is OK, your standard snowboarder type music, all by bands I've probably never heard of. No way I've seen to rip your own soundtrack.
Suggestions: If you're going to combine elements of the 2 top snowboarding games (Amped and SSX Tricky), make sure you encorporate ALL the best elements, not just some. Beef up the graphics. Make the career mode less tedious.