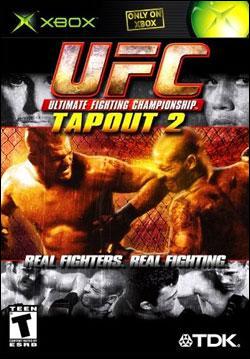 Tapout 2 will feature the most mixed martial arts brawlers in any UFC game to date, including UFC stalwarts Tito Ortiz, Chuck Liddell, Carlos Newton, Pat Miletich, and B.J. Penn. Several new fighters, such as current UFC Middleweight Champion Murilo Bustamante will also be making their debut in UFC: Tapout 2. The road to fighting immortality won't be an easy one; with an improved AI, fighters will behave even closer to their real life counterparts, use more attack combos and grappling, use more counter and reverse moves, and be much more aggressive overall than in the previous version. Tapout 2 will also feature a new array of fighting moves, including standing clinches, side mounts and half guards.
Unlock Mask
Enter Right, Left, Right, Left, X + Y (when Best Record appear for Arcade mode)

Overall: What is the point of this game? They repackaged Tapout 1 and threw in a skeleton career mode. There is very little new (the create a fighter screens look like they were ported directly from UFC 1). There is nothing really "new" in this game. It's not that the game is bad, but Tapout 1 played far more smoothly than this. So why would I bother with this?
Gameplay: It would be a lot better of the body parts didn't constantly pass through each other. The hit detection seems off as well. Often a strike that was by scale about a foot off target will impact. In the first one that didn't happen as much. Also, the submissions in part 1 seemed "stiffer". Also, due to rthe fact that you actually get a move set in part 1, it's a hell of a lot less redundant. The problem is, they've basically taken the preset movelists from the different styles in part 1, and gutted them. You use career mode to fill them up. There is very little in the way of actual "customization". You can't create combos, you can't select moves outside of your style. You just fill up the set that you had in part one, and you have a set amount of time to do it, so god forbid you lose a fight. BTW, the only new "position" is the side mount, which look terrible, the animation to enter the side mount is non existent (you knid of just suddenly and extremly quickly trun sideways). Pride FC has a well animated Side mount, and also added the standing clinch (very key and Kind of weird that a game with Muay Thai as a style would lack this fundamental of that art).
Graphics: The skin textures do look great. The muscles flex etc and it's quite good. The movement, well, a lot of the moves look awkward and unbalanced. Even the most basic things. For example, the Shoot Fighters bounce on their heels. No one does that. It looks silly.
Sound: Uh, well, the sound is exactly the same as the first. Same voices to choose from, same grunts, it's really boring.
Suggestions: Here's my 2 cents. If you've played (and you have no idea how it pains me to say this) Pride FC for PS2 then you know what a good MMA game is. You can customize your combos, create everything about your fighter from the ground up. TDK advertised an "in depth" fighter creation system. This is an absolute and utter lie. The create a fighter is EXACTLY THE SAME AS PART ONE (even the screens). I've been a martial artist for over 15 years, if you want to make the greatest martial arts game ever you simply need to do the following:

1. Make sure everything can be customized. This means custom combos, the abiltiy to design your fighter's appearance. They should use a similar format to most wrestling games for this. Variety is key, there should be hundreds of possible outfits. Custom movesets are a must. It allows people to design a strategy for their fighter and limits redundancy (which increases replay value).

2. If the graphics are hurting gameplay, sack the graphics. Yeah the fighters look great; until they move. The body parts passing through eachother has to stop, it completely ruins the realism. When I slap on a leg bar and my opponents foot passes through my shoulder the move just fails to look devastating or painful. Simplify the graphics if the game will play better.

3. A real career mode. The "career" mode in this game is a joke. It's completely unimmersive. In my 15 plus years of martial arts (in which I have studied nearly every art in the game) I have never encountered a fighter named "Stamina Master" or "Life Master". It's stupid. It's redundant. Beating the same boring fighter over and over again with my 1 move to get my stats up so I can hack it in a tournament with said 1 move is pretty boring and unrealistic. The fact that you have a limited time to upgrade your fighter is also completely bogus. You should have a limited number of moves, not limited time to acquire them. How hard would it be to make it so that when you create a fighter (in career mode, they should have an option to just make a fighter for those who just want to fight), you are given a list of schools and a list of tournaments. The tournaments up you physical stats and win you money. The schools you can spend your money to learn new moves from the Instructors. Perhaps they could even add a store where you can buy gear (better outfits, etc). As you get tougher and leran more moves you can enter bigger tournaments until finally you make it to the UFC. Allow players to advance at their own pace. If you want to be adventurous add an "Xbox Live Career". You could compete in tournaments online with a charater specifically designed for that who can only be used online. You take what you win online and upgrade in your own time. It would start a genuine tourney circuit in the live community. Anyways, that's my 2 cents. They put a little makeup on part 1 and sold it to us all over again. Frankly, I'll bet 10 dollars to a doughnut that this game was meant to be awesome and that they went over budget and decided to just toss it out there to try and recoup some cash. If this is what their intent was they need to overhaul their development team cause this is a cruel joke. Please someone release a definitve MMA game for Xbox, I don't want to buy a PS2, but if this is the best it's going to be, I may have to.

Overall: The graphics have improved over the original tapout. There are more modes to choose from and you can even play your own music. The developers did a good job on this title. They added new features and left what worked well alone.
Gameplay: There are more modes to choose from in Tapout 2. After you use CAF you can spar against opponents for points which is a neat feature. There is arcade, tournament, career etc. modes to choose from.
Graphics: The fighters and even the crowd looks great. The blood is pretty much the same but I'm glad they left it in. You really have to see the fighters to believe how good they look. The fighters move the way they would in real life.
Sound: I like the fact that I can rip my own music and add it to the game. Every (almost) Xbox game should have this awesome feature. When the fighters enter the crowd calls out their name. It sounds good.
Suggestions: Add real time damage to the fighters. Knockout Kings 2002 has it and it's great.

Overall: If you like fighting games this is a must have. If you played the first Tapout and liked it, this is a must have. And if you just like to play any video games, this is a must have. Very fun and realistic game and will appeal to pretty much anyone.
Gameplay: The game play on Tapout 2 has definatly been stepped up from the original. There is now a side mount where you can rain knees down on there head. Very fun and realistic moves have been added. I loved it just like the first one.
Graphics: This is one area that has definatly been stepped up from the original. This is one major reason why I would recommend buying this game even though you may have the first one. The fighters look a lot more realistic and the entrances look better.
Sound: Sound is great. Has the original music of the UFC. One of the great things is that you can use burned music to play during the matches. Alot better than the first one.
Suggestions: Damn, what is wrong with these game developers. Every fighting game should be on Xbox Live now. This one would have kicked ass. Especially if you could be on live and have a UFC tournament.