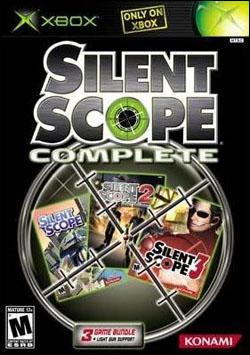 A helicopter flies overhead. The normally congested streets in the downtown business district are empty except for twenty plus police vehicles. While the S."

read more
Taking advantage of the Xbox's capabilities, this incredible first person shooter boasts enhanced graphics and stunning cinematics. Increasing the game's realism, the advanced targeting system and innovative 3D sound system allows players to precisely pinpoint and eliminate enemy targets. Gamers must efficiently and effectively complete each mission as they are timed and scored for accuracy. The 2-player option offer competitive or cooperative modes that will have players at the edge of their seats as they either work together to prevent terrorist attacks or compete against each other to claim precision shooting supremacy.
Score: 72
Overall User Average: 7.00 / 10 (72.0%)
Gameplay User Average: 6.75 / 10
Graphics User Average: 6.25 / 10
Sound User Average: 5.50 / 10

Overall: Silent Scope Complete is the complete collection of all the arcade Silent Scope Games. In it is Silent Scope 1, Silent Scope 2, the third arcade Silent Scope game (which is different than the PS2's Silent Scope 3), and a PS2 port of Silent Scope 3. It's a lot of bang for your buck, but with a lackluster light gun and the insane brightness level needed to play the game, is it worth it?
Gameplay: Since these games are made for the arcade, the gameplay is very straightfoward, putting you in the shoes of a sniper who has to stop a wealth of terrorist attacks. There are branching paths, which really increases the replay value, but only Silent Scope 3 (which was a PS2 game) offers a game where it'll take more than 20-30 minutes to complete.

Besides the main mode, each game has a bunch of modes--from the standard training modes to the sniper hunting mode.

As far as content, SSC excells with hours of arcade gameplay. The thing that bring the gameplay down though is the lightgun. The problem here is that if you don't have the lightgun, the game isn't as immersive and fun, but then if you do have the lightgun, you'll find that it doesn't work properly. The perk of the gun in that when you look through the scope on it, a sensor will make the reticule on the game screen turn into cross-hairs. The problem is that this didn't work on my gun (and from what i here, it also didn't work for most other people). This left me to have to use the manual zoom, which wasn't as fun. Plus for the $50 the gun costs, it feels way too light and cheaply made. The & feature is also nothing more than a small rumble noise that comes from inside the gun, and you don't even feel it while playing.

Overall, the gun was disapointing, but if you don't mind it's shortcomings, SSC offers a lot of content.
Graphics: Now visually, Silent Scope Complete is bad. None of the games have gotten visual overhauls for the xbox, which makes them all look way too dated. The only game that looked good at times was Silent Scope Complete, which I thought had some nice backdrops and much better effects than the other games.

So we already have plain, bland, and ugly looking games to begin with, but what ruins the visuals is the insanely high level of brightness you need on your TV to use the lightgun. This washes out a lot of the color, and makes the visuals look that much worse.
Sound: It's an arcade game, so don't expect much for the voice acting and the effects. The voice acting can be summed up as just cheesy and stupid. You almost want to laugh at some of the bad accents on the bosses, and the very dumb dialougue that they say.
Suggestions: Graphics need an overhaul, and make sure there's a quality lightgun that's out when the game ships.

Overall: Total crap. Could have been a great
game, because I love playing this in the
arcade. But the game has SERIOUS bugs. I
purchased the Pelican Light Rifle
specifically for this game, and guess what?
It barely works. You have to increase the
brightness to a ridiculous level on your TV
for the rifle to even work, and even then
you have to be within 10 feet of the TV.
This is not a problem with the light rifle,
which works great with House of the Dead
III. It is a problem with this game. They
need to recall this game, fix the problem,
and then release it.
Gameplay: Tried playing the game with a normal
controller, and it just isn't the same. It
takes too long to pan across the screen,
and it is very difficult to isolate distant
targets. Don't even try the speed runs,
because you barely have time to pan
across the screen. Would have been a
great game if it was programmed better to
deal with the light rifle.
Graphics: Visuals are good but not great. Still, what
do you expect in a sniper rifle game? The
graphics are acceptable. Compatibility
with the light rifle is my main beef.
Sound: Sounds are imported right from the
arcade, which means they are designed to
compete in a loud arcade parlor. When
you are at home by yourself, they sound
too over the top. Same problem afflicts
House of the Dead. I wish they had gone
in and adjusted the sound to give it a less
carnival atmosphere.
Suggestions: Figure out why the light rifle works so
poorly with your game. Talk to the people
who designed House of the Dead III for
Xbox, because they already figured out
this issue. Re-release this game once you
have solved the light gun sensitivity
problem.

Overall: Sniping Sniping Sniping, I just cant get enough of it if you have the same feeling then this game is for you all about sniping nothing but sniping.
Gameplay: The game play is ok not great there isnt alot of replay value thats the disatvantage about this game.
Graphics: The visual isnt too good well its not rubbish put it that way its not the greatest could be better
Sound: The sound is also not to good there is practacly only 2 sounds that go on in the game the gun fire and the bosses voice wich he says the same thing over and over again.
Suggestions: cmon guys you can do better

Overall: This is everything you loved about the arcade game, and its in your living room. But you have to buy the rifle that works with the game.
Gameplay: Well I am a gun owner. I love going to the gun club and leting a few hunderd rounds go on the range, but winter sucks. Now I need not buy ammo or freeze in the cold to practice. This is as good as the arcade but you will have to adjust the settings a bit before enjoying this prize.The difficulty settings had me rather angery that at first but after a half hour of fiddeling to see what fit me it was god.
Graphics: They made no changes to the earlier silent scope games (1&2) so their nothing great, but 3 and ex are awsome.
Sound: NO MUSIC CONTROL!!! I would have liked to pick me own mix for this game.Gun sounds realistic.Some voice over were funny.Nothing great.
Suggestions: Own music mix. Better Voice overs. Better plot. More gore. GUN SELECTION, I would have loved to pick out my own gun no power ups i want a large choice to pick from rainbow 6 stile. Normal bad guys shouldn't die if i shoot them in the hand.