More than forty years ago, director Ridley Scott introduced audiences to one of the most terrifying creatures film has ever seen. Of course, I’m talking about Aliens; the iconic horror and science fiction film that pits Sigourney Weaver and her space travelling peers up against alien Xenomorphs and Face Huggers. Despite being several decades old, the movie remains a masterpiece, and exists as a master class in filmmaking. It is not for the weak stomached, however.

Since 1979, Aliens has gone on to spawn several sequels, a prequel or two, and some spin-offs featuring Predator. There have also been numerous video games, as well as quite a few books, or so it seems. We, here at XboxAddict, were offered an opportunity to review the latest, and took Titan Books up on its offer. It’s called Aliens: Infiltrator, and was written by Weston Ochse.

I won’t admit to being any sort of an Aliens expert, because I’m not. I like the first two movies, struggled through parts of the third and saw some of the others. I don’t remember a ton from any of them outside of the first two, and haven’t read any of the other books. Thus, my knowledge is lacking.

From what I gathered during my read, Aliens: Infiltrator takes place shortly after the events of at least the first movie. At this point the humans know very little about the Xenomorphs that they’ve discovered in the outer reaches of the galaxy. In fact, these silly human beings – who make up a rather dumb and cookie cutter ensemble cast – have decided to do something boneheaded. Then again, isn’t that always the case when it comes to such fiction? 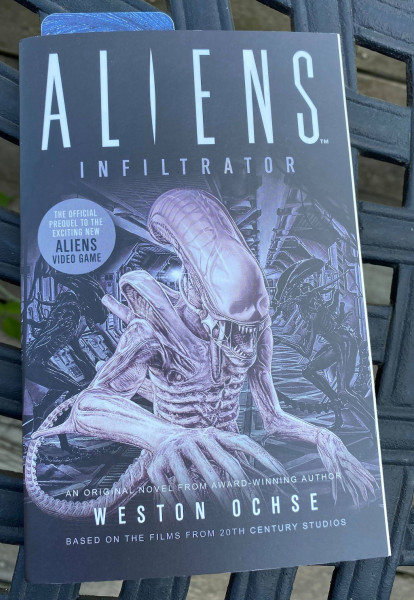 This three hundred and forty-four page story begins as Dr. Timothy Hoenikker arrives at Pala Station. There, in a construct built in the middle of nowhere, he finds himself sharing an elevator with a Logistics Specialist named Fairbanks. However, unlike the newcomer of a scientist, Fairbanks’ arrival marks his return from a lengthy vacation of some sort.

As far as he knows, Dr. Hoenikker is there to study alien artifacts, which is something he’s dreamed of doing for some time. That doesn’t end up being what happens, because the job description wasn’t at all accurate. No, instead of doing research on safe objects, Tim finds himself working in an active laboratory with several other scientists. At first they’re responsible for testing a new alien pathogen, and seeing how they can manipulate rats that have been turned into hideous and dangerous creatures through experimentation, with the hope of making better armor and weapons for the Colonial Marines. Then, things evolve and live eggs are brought on board, along with human test subjects who are to play host to chest bursting Xenomorphs once the original Face Huggers are done with them.

Needless to say, this is a stupid idea that blows up in everyone’s collective face. It happens surprisingly late in the story, too, because this thing takes so damned long to really get going. I’d apologize for spoiling something, but everyone who’s read the book’s premise could’ve predicted it.

The thing is, though, that this particular novel is called Aliens: Infiltrator. There’s a reason for this, and it’s a certain someone who’s been threatened by a rival company and tasked with trying to steal information from the Weyland-Yutani Corporation, which owns and operates Pala Station. Judging by the subtitle you’d think that this character’s duplicitous intentions would play a massive role in the forthcoming story, but they really don’t. It’s odd.

Truth be told there’s very little to set this narrative apart from any other humans meet aliens story out there; at least when it comes to those that fall within the action, horror or science fiction genres. This is an Aliens story through and through, and not a particularly good one. It starts off pretty well, but then slows to a crawl, and takes forever to pick back up again.

In fact, a large part of this story isn’t about humans fighting aliens. Since this thing centres on a scientist and his peers, a lot of the words chronicle humanity’s study of a fictional creature, including basic science and unadulterated torture. Lots of the book takes place within said lab, which is so obviously underequipped for the claws, acidic blood and strength of the Xenomorphs it intends to hold. Hell, the writing is on the wall when it’s said that the Fabrications Department is lacking tungsten, because the station’s commander used a bunch of it to build a hunting lodge a few kilometres away. Said tungsten is used to create the reinforced glass that is used in the lab.

Before I go any further, I must also mention something else. Thus far, I’ve forgotten to state the purpose of this book.

As the cover loudly exclaims, Aliens: Infiltrator by Weston Ochse exists as a prequel to an upcoming multiplayer survival game called Aliens: Fireteam Elite releasing August 24th, 2021. This isn’t abnormal practice, but it feels a bit odd in this case. The reason I say this is because Fireteam Elite is described as being a multiplayer game, and it doesn’t seem like the type to feature much of a story. Then again, I may be proven wrong.

From what I’ve read and gathered, Aliens: Fireteam Elite is a third-person and team based shooter. It’s one that unsurprisingly centres upon a group of soldiers who are tasked with investigating a distress signal. I don’t particularly see why a 340 page novel is required to set up such a basic premise, but maybe I’ll appreciate the tactic more when I play the game. It’s just odd, especially given how this book ends. 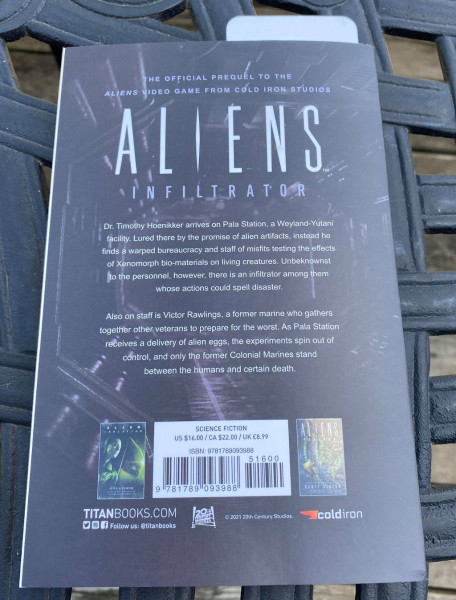 Before being sent this narrative, I had never heard of Weston Ochse. Based on his most recent piece of work I would consider him a decent and competent writer, who did what he could with a pretty basic story. The writing is mostly fine, although it’s got some rough spots, and it serves the purpose for what is a B-movie style of a novel. I did find it hard to jump back into this thing after reading Billy Summers by Stephen King, but that’s my fault more than anything. I started Aliens: Infiltrator a couple of times, actually, and got sidetracked by other books at first. Although I put it down the second time, I went back to it and read in short bursts. It wasn’t until recently that I realized I really needed to get it done and powered through the last 130 pages or so.

Was Weston Ochse the best choice for this book? I really can’t say. He did what he could with what he was given, it seems, unless he was the one who came up with the whole plot line. Perhaps someone else could’ve written something more engaging and original.

What I also noticed while reading this thing was how the Xenomorphs were treated differently depending on the situation. Although the author often talked about how smart they were, they would occasionally run into gunfire with reckless abandon. Furthermore, the author really took creative license when it came to how many bullets or hits from a flamethrower it would take to kill one of these creatures. Some seemed like the literary equivalent of bullet sponges, while others went down much easier.

With all that having been said, I probably don’t have to say that Aliens: Infiltrator is (unfortunately) a pretty forgettable book. It will entertain the series’ diehard fans, but those looking for a good and thoroughly engaging read will probably want to look elsewhere. This is B-movie schlock, and it takes a long time before anything exciting happens. The characters are also dumb and lacking in both smarts and creativity.

As much as I wanted to like this one, I far too often found it to be a chore to read.

**This Aliens: Infiltrator review is based on a copy of the book that we were provided with** 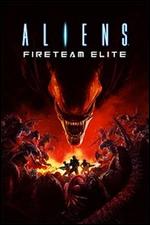