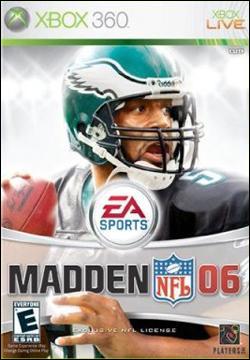 For 16 years, Madden NFL football has been the definitive gridiron video game experience. With enhancements to the passing game, defensive improvements, and expanded online options, Madden NFL 06 takes you onto the field and into the locker room like never before.
Enter History Book

Enter any of the history book screens in Franchise mode.
10

Activate any of the RS cards
10

Score a Touchdown in any Offline game mode.
30

Get a First Down

Gain a first down in any offline game mode.
20

Four Sacks in One Game

Win the Super Bowl with your Franchise team.
100

Overall: A good football game especially for a complete rebuild of the game for the new console. Although, I would've just waited for 2007 version and not even wasted my money on this version, but I had to have an NFL game with 06 Chargers( probably the best Chargers team ever to exist or will ever be). I only paid $20 for the game and it is well worth that amount, but $60 or even $40, I don't think so.
Gameplay: This is were the game feels unfinished or a little on the raw side. For the most part the game is very solid with great controls and a very good button layout. BUT you can't challenge a call!?!?!?! And once you zoom out to check the lines your stuck zoomed out, puzzling at the least. Little bugs here and there also occur. For example, I through a pass to the right side of the endzone and normally when the receiver jumps up fora catch while running could've landed out of bounds but instead once the ball hit his hands he dropped straight down like he had no forward momentum at all. Fortunately these little glitches don't occur often.
Graphics: The visuals are excellent for a first run on new hardware. The animations with some small occasions are more life like any NFL games to date. But from what I've seen so far 2007 is going to kick it up notch.
Sound: The sound is far improved over the previous versions. Gone is the god awful commentary and replaced with a simple yet effective radio broadcaster along with the stadium PA announcer. The sounds on the field are more of the focus this time around and they are pretty good for the most part.

Overall: This game was really fun when I got it however I think the game had a bug because it would make my xbox freeze. So later I returned it and got another one, it did the same thing. I couldn't put up with that much longer so I gave up.
Gameplay: The gameplay was good as far as controls and factors like that go, however I think that it was a little repetitive.
Graphics: The graphics were amazing. This game is at the top of the list as far as graphics go. They are detailed as far down as facial features, sweat, and even wrinkles in the clothing.
Sound: The sound is good the is some good monolouge in it. It is great to basically controll the crowds cheering too. However it is somewhat basic.
Suggestions: I think you guys should definetly fix those bugs, that was the biggest turn off. I also think that you guys could add differnet elemts into the game, like training and political elements like drugs and underground issues that the players and coaches have.A good example of this is in Def Jam Fight for New York.

Overall: Madden 2006 enters into the next-gen era with a watered down version that is one of the worst Madden games I have ever played. EA took out many gameplay options such as the mini camp and the ability to challenge plays is now gone.
Gameplay: The controls are laid out very well, very fast learning curve. The tackling isn?t very realistic at all, I was very disappointed.
Graphics: Madden 2006 looks good, players faces and the stadiums look very realistic. The fans are also modeled very well.
Sound: The announcers are mediocre, they say the same thing?s throughout the whole game. The crowd reacts pretty well to what is going on in the game.

Overall: Madden is the standard for the next generation of football games. The game overall will have a familiar control scheme to anyone who's played Madden on earlier consoles, but the game itself is actually very different. I actually bought Madden 06 for the xbox to get used to playing it on the 360. The 360 version is a different animal that will take a little time before getting used to it. It's not a very deep game. I couldn't even find an online franchise mode or league mode. It does come with a thirty year franchise moded which is nice if you have the time. Stat tracking is hard to find at first, but is much improved. Madden provides stats for pretty much anything you could want. It might just be me,but it seems like this game was slapped together in order for it to be released at lauch. I think EA could have done a much better job if they had chosen to do so. They've been mailing it in on their sports titles for years. If you are going to buy the license to be the only football game allowed to have accurate NFL information, you should hold yourself to a higher standard and make a game that leaves no question that it is the best football game made for the 360. Although Madden falls shor of this, it is still fun to play, especially online.
Gameplay: The gameplay is generally the same as all the Madden games before it, but improved once you get used to the controls. The player movements are very realistic. The view from the line is really too close until you hit the trigger to back away, then it's too far away. It's best to play in the zoomed out mode because you can see most of the field, but the players are a little small and hard to see. The passing game is well done, realistic and fun. The running game is excellent once you get used to the controls. Some running plays work one time and are squashed at the line the next for no apparent reason. It's not like a guy missed a block and that caused the play to tank. It's kind of like random chance determine's the outcome or something. The defensive side of the ball is fun to play. You can lay some monster hits with the hit stick. The one huge control change is that they made A the strip ball button and the right trigger the sprint button. These changes are for the better once you get used to it.
Graphics: Visually, I was expecting something more. The opening movie sequence looks ridiculously good, but you don't see quite that level of quality in game. It could be because you have to play zoomed out to see the whole field and just can't make out the players as well. The stadiums look perfect. The coach models are really improved from other versions. Andy Reid doesn't just looks similar to the real Andy Reid, he IS Andy Reid. While the visuals don't measure up to what I thought they should, they are still pretty !&%$@#* good.
Sound: The sound is perfect. I kind of question going with an unknown radio announcer, but it seems to work all right. I'm one of the minority who liked Madden's commentary. The in game sound is stellar, especially if you have 5.1. Hearing sounds that actually depict what is going on behind you is priceless. The soundtrack is excellent. Overall, the sound is stellar.
Suggestions: Put in online leagues and online franchise. It's a !&%$@#* shame that 2006 didn't contain this feature. That would have given it endless replay value. Figure out a way to let the improvements made in the player models shine. It's no good if you can't see them well during the course of the game. Also, wide screen should enable you to see the whole field, not almost the whole field, but the whole field.

Overall: The game is amazing and loves the way the graphics look and the way it plays!!! I was wowed when I first start playing this game! I never be able to keep my mouth close.
Gameplay: I would give it a 5 if it has a FPS mode! The gameplay is great anyway. Hurry ESPN NFL2k6! Gotta have the real football in the game!
Graphics: The most perfect graphics I ever seen ever in Madden series! XBOX 360 is well worth it!!! Those shinnings and textures... oh my god!
Sound: I gave it a 5 because I am deaf and doesnt hear any sounds. Subtitles would be requirement to me but this game doesnt seem be talking much.
Suggestions: Add FPS mode!!!!!!!!!!!!!

Steelers Edge Seahawks In Xbox 360 Action
Look to the Pittsburgh Steelers to take the Super Bowl, according to an Electronic Arts simulation of the NFL championship game set for Sunday in Detroit.
Madden NFL 2006 Video Posted
Yes that's right add another xbox 360 video to the list. Madden NFL 2006, I'm sure there have been a couple people waiting for this one.