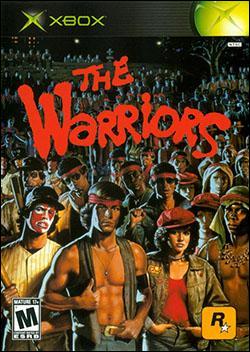 The Warriors is a game that derives from a 1979 cult favorite of the same name. This button brawler comes from none other than the Rockstar team from Toronto. True to form this game touts shady activities and lewd language by the gang load."

Overall: For those of you who are fans of the cult classic movie of the same name...you get to play through a few parts of the movie...but a large portion of the game are the events leading up to those of the movie and even some background on how the warriors were formed. So fans of the film, or action fans who like the Rockstar brand of games, pick this one up.
Gameplay: A) this film is pretty gritty and violent B) Rockstar is known for making games for the "Mature" audiences, so this pairing seems only logical. From muggings, graffiti, massive beatdowns, stealing, beating citizens/rival gangs/cops and more...Rockstar combines some pretty cool things from GTA and Manhunt, while staying very close to the Warriors universe in 1979 NYC.
Graphics: The visuals are nothing special, bordering on generic, but the drab, poorly lit, crime ridden streets of NYC in '79 seem to feet the lack of bright colors, dingy back allys, poorly locked stores, and crappy cars. Once again, nothing great here, but the action and HUGE amount of unlockables to find and explore make it worthwhile.
Sound: A large majority of the voice talent, and there is alot here, is from the original actors from the movie, complete with original soundtrack and some pretty well cast voices for all the extra backstory stuff involving rival gangs, cops, civilians, dealers etc. ..."Warriors, come out to play"...
Suggestions: Once again, I think Rockstar is one of few compaines, aside from the major first party studios, that is still making truly creative and enjoyable games. While they may have come under fire for recent game releases for sex/drugs/violence or all of the above, I can't wait to see what these guys will bring to the next-gen realm.

Warriors! Come Out To Play-yay!
Rockstar announces that The Warriors shipped to retail today. Finally, I can relive my favorite scenes from this silly, cult movie. Time to take it to those goons on roller skates. Screens inside.