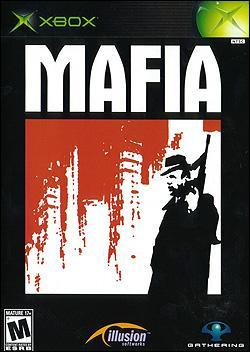 Let?s face it. Mafia themed movies and shows have become almost as classic of a genre as westerns."

read more
Mafia brings the underworld of the 1930s to life in this third-person 3D action game. Rise from the lowly but well-dressed Footsoldier to the envied and feared Made Man in the era of big bands, zoot suits, and Model Ts. Take on the role of a hit man, enforcer, getaway driver, and more in your struggle for respect, money, and power within the Salieri Family. The game features 20 action-packed missions with sub-quests in a city more than 12 square miles large. From mob hits, car chases, shootouts and more, complete the unsavory tasks the Family requires done and you will be handsomely rewarded.
Score: 70
Overall User Average: 7.17 / 10 (70.0%)
Gameplay User Average: 7.17 / 10
Graphics User Average: 7.50 / 10
Sound User Average: 7.67 / 10

Overall: This game just sucks soooooooo bad it a Geataway rip off it just isnt worth buying
Gameplay: The gameplay is very poor there isnt alot to do thats all there is to say really
Graphics: The visual is good thats about it.
Sound: The sound isnt very good all it is, is gun fire to the game practacly

Overall: I wouldn't get this game. I would rent it, and the only reason why I would rent it is just for the storyline. Because the storyline is one of the best for xbox. This game could have definitally been worked on more. The world is pretty big, but the lack of graphics just becomes an eyesore. Also, all the driving just becomes a finger sore. Also, once you beat the game you defintally won't play it again untill about a month or so. Some of the missions just become tiering, or are just to hard. The developers had a good idea about this game, but I feel there could have been a lot more work done to it.
Gameplay: The gameplay is different to this game. I mean that by when you drive around the city it seems so easy to control everything, but when your running around on foot the controls seem more choppy. You do get used to it, but since the beginning you drive around a lot so your first on foot mission becomes a hassle. The controls are sortof hard to get the hang of at first, but then they get easier as the game moves on. The driving of this game gets WAY old. You drive so much in this game it's practicly insane. After 2 missions my fingers would start hurting from driving so much. I personally think the gameplay could have been worked on a little bit more.
Graphics: The visuals...eh...the visuals. The visuals are by far one of the worse on the xbox. Yes the game has a huge environment and everything, but the visuals are just choppy and jagged. It seems like when you play this game that the creators didn't put much effort in the graphics at all. The only really neat thing about the visuals is that as the game goes along in time new cars start appearing on the road, and eventually the old pile of crap you used to drive won't even be seen on the road anymore.
Sound: The sound is probably the best part to this game next to the storyline. The music playing in the car as you drive along from destination to destination really gives this game a classic feeling. The car noises are pretty good. Except the only problem is is that I don't know what these old cars sound like so I can't really tell if they did a good job or not. The gun sounds are good. Not exactly the best on the xbox, but won't let you down. Oh, and I really liked the startup song for this game...props on that.
Suggestions: Don't make a sequel. It's a real good idea, but not exactly the best to make a game out of.

Overall: Nowadays, the major problem about games is having a good storyline.
Mafia stands out from the crowd.
Get ready for a 1930's mob style adventure game. The scenario is all about godfather and goodfellas like, just don't expect a "america's most wanted action game". Very nice game... original and addictive. Nice cutscenes, very interesting storyline. By the way : this member review has been written by a french-speaking member, be indulgent :)
Gameplay: Nice shooting, very realistic. You has to take cover and aim carefully. Feels realistic.
Driving cars is a pain, good since cars at this period of history probably had such a bad handling. It adds to the game difficulty and realism. Don't listen to people comparing about mafia's bad driving, it just couldn't fit a grand theft auto driving style, it is not the ambiance of the game.
Another interesting thing is the gameplay camera, it is very good.
Graphics: Not the best, not the worst. However, don't expect me to put a bad score on graphics. How many games out there are just eye-candy but are plain no-fun? Well, mafia
ain't eye-candy but it is a big fun
to play anyway! If you want a bad visual game, just try tenchu return from darkness! THAT good would get a 3.0-3.5 on 5, but not mafia...
Sound: Very nice soundtrack, big band jazz from the 1930's, installs a good atmosphere for the game. nice gun sampling, for the cars too. Voice sampling is also cool, good quality voice acting with the italian accents and such. Voice acting sounds cool and not
Suggestions: Humm... less driving, more strategy in the adventure game. Probably more than one way to complete a "mission". Also, maybe a little less linear but not as grand theft auto which makes this other game too much "arcade type".

Overall: Mafia is an old game. If you've already played it on the computer, from my understanding, there are no significant changes, so steer clear. If you haven't played it, like myslef at one time, I recommend you rent in for a weekend. The Story Mode of the game is a very fun experience, and although there are some frustrating parts(in game glitches mostly,) the game moves along quite nicely. As for the other modes, Free Ride and Racing, they are just side modes, and aren't really addicting at all, which is why I would only rent this game if I were you.
Gameplay: The game plays similar to Grand Theft Auto, and both share many similarities, although the Story Mode in this game is totally linear, unlike the freedom of GTA. The missions are very fun, and the cinematics make the whole thing very immersive. However, the game requires a boatload of driving from point A to point B to point C back to point B, etc. This gets very stale and repetitive. Other than that, the game flows nicely, and the last mission persay is very fun.
Graphics: The game is old and it seems like it did not recieve a graphics update for the Xbox port. That being said, there is not much to be said, other than the graphics are similar to most third person action PS2 games. The cutscenes however, are what make the game special.
Sound: The voice acting of this game is actually pretty good, and its really cool to play out a mobster movie story type of thing. The Italian accents and the line "Mr. Salieri sends his regards!" are what make the cutscenes special.
Suggestions: The repetitive driving and the shortness of the story mode(no more than 12 hours) hamper the game, but the storyline and cutscenes make up for it. My suggestions, make the driving less repetitive and make the game longer. Also make the extra game modes more interesting.

Overall: Right off the bat it gives you a great intro with you strolling around the city going to diffrent places and all. It is a combonation of GTA, Driver, and the dirty '30s. I think even the braking system is accurate, as your steering is horrible when stepping on the brakes (no ABS)
Gameplay: You can choose from driving around town in various vheciles or walk around killing people or whatnot. Great story line of you joining a mafia family.
Graphics: Its actually quite hard to tell as i played it on a 10 year old television and prolly couldn't see the game at its full force. The the camera angles were good as were the environment.
Sound: Chitty chitty bang bang. The gun sounds are done fairly well but the car sounds lacked a little bit. Mostly just in the skid mark sounds.
Suggestions: Top notch, maybe a few more weapons. Honestly I'm glad not to see hookers like in GTA...that's just a tad ridiculous.