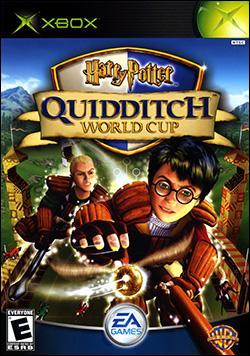 The magical sport of Quidditch is an exciting and challenging game involving two teams of seven players who fly on broomsticks, four balls in simultaneous play (one Quaffle, two Bludgers, and the elusive Golden Snitch), and a unique scoring system. In Harry Potter: Quidditch World Cup, players can control all the Quidditch positions and high-flying moves, scoring with Chasers, defending with Beaters and the Keeper, and trying to capture the Snitch with the Seeker. Gamers can choose any one of the four Hogwarts House teams (including Harry Potter’s Gryffindor and Draco Malfoy’s Slytherin) to triumph in the Hogwarts Cup, gaining an opportunity to attend the Quidditch World Cup.
Score: 95
Overall User Average: 9.50 / 10 (95.0%)
Gameplay User Average: 9.00 / 10
Graphics User Average: 9.50 / 10
Sound User Average: 8.50 / 10

Overall: This game is so awesome. So long I've waited to relive the "magic" of Quidditch, and then this game comes along. The only problem I have with it is it's so easy to steal the quaffle from the other team. other than that, sweet game.
Gameplay: Ok, so you start out by playing for the Hogwart's Cup. Then, when you win that, you can play in the Quidditch World Cup. Choose from an array of teams, each with their own unique strength. Great game.
Graphics: EA really has outdone itself with the harry potter graphics in all of it's games. Simply...incredible.
Sound: Not much sound, just crescendo sounds in the game when you're speeding toward the other team's 'hoop.
Suggestions: Make the game harder! I'm playing with the USA team and I'm still undefeated and ahead of everyone by like 100 points.

Overall: Quidditch World Cup is an amazing game. The visual effects are amazing, low learning curve and fast pace action keeps the game moving. The game though, is directed to kids. Its an easy game to master and an easier game to win. However there is a lot to do in the game, so it makes it very long game to finish. Overall? I give the game 4.0-4.5. Its incredibly fun and entertaining. Harry Potter fans will truly appreciate bringing the sport to life on a competitive scale and for some one like you and I to enjoy
Gameplay: Simply....Defense is too easy. Offense is incredible!

OFFENSE IS A BLAST! you can pretty easily perform outrageous combos with the quaffle, and one-timing it in to the hoops never gets old. Each team has their own unique special scoring maneuver, and I think Australia, Japan and Bulgaria probably have the coolest ones.

They put more of a emphasis on passing the ball rather then scoring points. The more combos you do, and the more maneuvers you perform puts length onto the snitch meter. Each team has a snitch meter, once the two snitches come together, then you take control of the keeper and catch the snitch. If the snitches connect at point more or less to one side, then the bar that is lesser than the other, follows over to that respected seeker's boost bar and is shorter than the other, giving the other seeker an advantage in catching the snitch. once you catch the snitch, remember, you get 150 points and the game is over.
Graphics: Visually, the game does not get any better! The playing arenas are magnificently designed. The players have a very cartoonish appeal to them, and even though a more realistic approach might have been what i would have shot for; that does not take anything away from the game. Some times it gets difficult to tell who is on your team, the colors some times blend especially with the stadiums...Overal....very beautiful

Sound: Sounds are great! I really like the back round music, but the voices get very redundant. Kind of like John Madden, even though you don't know what hes saying in the first place. The one song I'm thinking of in particular that i would die to download on the Kaza would be the one used on the trailer. It just strikes my attention and pulls me in! Some times i think of the song and want to play the game! Despite the voices, I find myself saying Bludga' instead of Bludger. So i guess they did something right.

Suggestions: To make the game more difficult, make playing defense harder. It is way to easy to steel the quaffle from the chaser.

Less childish! There are some Young Adult fans of the Harry Potter series out there.

More maneuvers would be appreciated to.

An addition to Hogwarts mode: where you make a player, put him on a team, and then you play him for four years (something to that extent). A type of Franchise mode.

Of course, on line play!

If more maneuvers were added to the game, a free fly mode would be very very cool. Where you could just fly around passing the quaffle and trying to work out some combos and strategies.

When guys get knocked off there brooms, they should hit the floor. Then stagger around on the ground till they regain their broom and get back into the air.


Skill levels: It would be nice to view the entire teams and check out each ones statistics (goals, caught snitches, connected bludgers, etc).