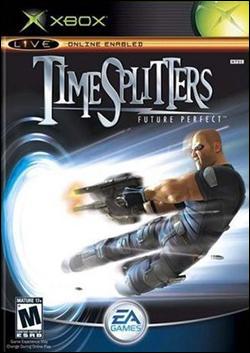 TimeSplitters: Present Good. It?s time to move on to the future."

Overall: Consistent with the outrageousness of its predecessors, Future Perfect follows the hectic life of Cortez through 1920 to 2200 something chasing a madman who wants to take over the world and achieve eternal life. Sounds very stereotypical, and it is. FP has mastered stereotypical masterfullness! :watchout:
Cortez plays his usual corny self. A lot people didn't like this, but I think that is what makes Timesplitters. The single player mode (which I did in Co-op) is very fun, but doesn't offer much of a challenge. I thought the story was just fine for a game of this genre, but I beat it in about 7 hours. It was definately fun to play, and I was laughing... a lot... at times.

They have a lot of old weapons but some new ones still. The greatest addition is Half Life 2-esque device that can pick up items and launch them. This is extremely fun!

The challenges return. Each of them was very fun. You have the classics such as Behead the Undead and Cutout Shootout, then you have some nice miscalaneous ones, including Monkey Curling. Yes, curling, with a monkey. It may be because the control is better, but I did a lot better on the challenges this time around. They seemed easier...

The arcade league was pretty much the same. In fact, a lot of the levels are from 2. That's not necassarily bad, but they weren't much of a challenge.

Multiplayer kick some major ass! The obvious great thing about Future Perfect is its XBL capability, which I didn't have a chance to try. I did try all of the multiplayer modes with bunch of friends, and it was a lot of fun. The bots are still a little dumb, but it's all good.

I had this game complete in 13 or so hours. That is 70% complete because I beat the single player on Co-op instead of single.
Gameplay: Very similar to TS 2. I feel like the controls are better though. With TS 2, I could not start playing right after Halo because it's sensitivity and control was off the chart. The control is very smooth, It feels really good, I'm not sure what they did, because it is still really fast, but they fixed something. The only thing that got a little tired was the one button for two guns, but that's just because of Halo 2.
Graphics: Reminiscent of the Timesplitters universe. Nothing groundbreaking, but still unique in it's own way. The game looks better than its predecessor and has better animation, cutscenes, and special effects.
Sound: Dolby Surround, just like every other game. Immersive, but again, nothing groundbreaking. The voice acting is pretty good. Except for Cortez, which I'm sure Free Radical did purpously. Cortez is a hoot, from start to finish. You can, in fact, draw many similarities between Vin Diesel and Cortez. The single player was very cinematical, and felt like a movie. The one-liners from Cortez were hystercal at times. The game made me laugh, which is nice break from the norm. So, don't play this game in a bad mood, the tone of Cortez voice alone was enough to send me rolling.

All of the other voice acting is great however, so no worries.