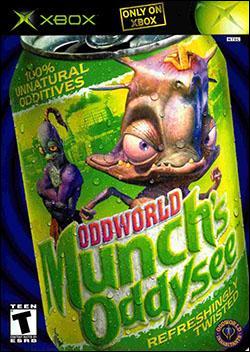 Undoubtedly one of the most anticipated titles set for launch on the XBOX is none other than Oddworld: Munch's Oddysee. Developed by Oddworld Inhabitants, Munch's Oddysee is the third title in the Oddworld series. Mudokon hero, Abe returns from the two previous titles Abe's Oddysee and Abe's Exoddus to rescue his mother who has been captured by the evil Glukkons.


Q: First off thanks for taking your time with us. Could you start off by introducing yourself and what it is you do at Oddworld Inhabitants?

Q: With E3 just around the corner what can attendees look forward to seeing of Munch's Oddysee at the expo?

A: Wow, how do I answer that one. If you saw Gamestock, you're going to see a whole lot more at E3. Some things that haven't been shown before… Realtime transforming environmental health triggered by working Mudokons. Chump Mudokons being transformed by Abe into more powerful protective forces that will be gamespeaked around and told to do various biddings, some of which include helping to break through security lines to infiltrate factories. Gang fights that are hilarious. Sligs being tossed into landmines. Sligs being tricked and turned into Fuzzles. Abe creating spooce balls that get navigated around and allow him to possess other characters. These characters using their money to buy additional fire power to clear the way for Munch and his Fuzzle friends, etc.

Q: Since Munch is amphibious, can we expect to see totally underwater style missions with Munch? Also is Abe capable of swimming as well?

A: Abe can't swim. So if he falls into the water you better help get him out before he drowns. Basically, Mudokons as a race don't like water. Munch uses water, but we will not be having underwater levels. He will use water more like a jet ski, not like a submarine.

Q: Is Munch's Oddysee putting weight on NPCs and how do they fit into the game play and atmosphere in general?

A: There are going to be more enemies than we've ever even come close to having on screen at any one time before. They talk to each other in funny ways, they stand guard, they sleep a lot. They will chase you down and club you. They will try to shoot you. You can possess them and use them against your enemies. You can also possess Glukkons and steal their Moolah. It's very Oddworld in nature but taking it to the next level.

Q: The outdoor landscapes look very detailed and lack the rough blocky look of other outdoor engines. Could you explain the technique of how the smooth rolling terrain is generated? Are you guys using some type of displacement technique?

A: No, we are not using displacement map techniques. We have used other approaches that are very unusual to most outdoor 3D landscape approaches. But I'm not going to explain how it's done. :)

Q: A common problem with 3D engines is the rendering of outdoor environments in far off distances where a fogging effect is used to help the frame rate. From the tech movies that we've seen, that doesn't seem to be a problem with Munch. Can we expect that same vast landscapes with full AI routines, sound and physics in place?

A: Yup! All of these are in place and happening simultaneously. We're seeing much further in the actual game than our earliest visualizations suggested we could. It's a deep perspective that really helps to make the world have a lot of depth.

Q: Will there be any new vocal commands as far as GameSpeak goes for Abe and Munch? Also does the execution of GameSpeak differ from previous Oddworld titles (control wise)?

A: All GameSpeak is currently taking place on two buttons with no shift keys (like the last games had). It's much, much simpler than our earlier games yet allows greater control over other characters that have many more abilities than before. You can also transform these characters to make them something more powerful. Each character you pick up (via GameSpeak) becomes a living power-up for you. Abe gets Mudokons, Munch gets Fuzzles. It's very funny to just run around with these guys and talk, hear their responses, see what they do, watch them jump Sligs, Vykkers, Interns, and more.

Q: There seems to be rumors floating around that Microsoft thinks that the game in its current state is too complex for gamers? Truth or rumor?

A: We haven't heard about it.

Q: Not much has been said about a few of the creatures in the Oddworld Universe namely the Intern, The Rat, and the Sea Rex. Can you tell us a little bit about these characters and their role in Munch's Oddysee?

A: The Interns work for the Vykkers. The Vykkers are the scientists, and the Interns are their lackies. Kind of like Glukkons and Sligs, but these guys are even uglier and nastier. They test on animals, develop shitty consumer products that no one really needs but sell very well. The Rats have fallen to have a virtually nonexistent role in the game. The Sea Rex may only appear in movies. It's a huge water creature that feeds on everything.

Q: With so many titles coming out that are basically a rehash of the same idea, what formula has OWI figured out to keep the game play, characters and ideas behind Munch's Oddysee so fresh ("and so clean, clean")?

A: It's a lot of hard work to push the limits of creative potential. We planned early on to be very aggressive with the next generation systems. The PS2 fell short; the Xbox totally delivered. Our formula is simple. Let's build on what worked well and push it much further than people expect. You basically start off by over designing. Then you figure out how to fall back into a place that is reasonable. But you know you've pushed the boundaries along the way.

Q: In switching from a 2D side scroller to a free roaming 3D title, how is this affecting some of the popular devices that were used in the previous OW titles? A few examples would be the UXB (my personal favorite), the motion detectors and the drills. Will these hazards work their way into the new title?

A: There will be various kinds of hazards, but we're trying to keep most of them living character hazards. There are land mines (really fun to watch when characters hit them). UXBs work slightly differently than before. There will be drills, saws, etc. But some of the things we didn't like about these in our previous games were that they were one hit deaths. We've been trying to remove a lot of the one hit death stuff, in exchange for prolonged challenges that keep coming at you, or chasing you, or you chasing them, or you just trying to be careful in slow moving circumstances with a lot of danger around you. But we found that the one hit stuff frustrated a lot of people. So we try to find more interesting solutions that are more fun and less frustrating.

Q: More than ever in console games the music plays a significant part in setting the mood for the surroundings as well as events. Will Munch make use of music to further draw the gamer into the world of Odd? And also is the music being done in house?

A: Yes, the music is being done in house and yes, we are totally aiming at looking at music as though it's being scored in real time dependent upon actions happening in the world. We call it, Oddio.

Q: Aside from developing for the PlayStation 2, have there been any snags in development for Munch's Oddysee on the XBOX? Is it truly as easy to develop for as they say?

A: Building a big game that is creative and plays well is never easy. However, the Xbox is THE excellent development system that takes SOOO much of the headaches out of the process. When building on the Xbox, you don't have people running around pulling their hair out shouting about what a stupid backwards ass system it is. They find that the majority of their problems are actually THEIR problems, not the Xbox's problem. . . a massive relief for developers.

Q: With the first generation titles being developed on changing SDK's, do you feel that the power of the XBOX will be fully seen at launch? Or will the games just be scratching at the surface of what the XBOX is capable of achieving?

A: Launch will reveal new titles that do things that the game world has never seen or played before. This is a huge leap. But nobody is going to tap the true power of this system at launch. It's just way too powerful with so many abilities that are new to console gaming and gaming in general. This system is what developers want it to be, but it's also a system that is going to totally challenge their design creativity in order to max out its full potential. It's going to be very exciting to see what happens with the Xbox in years to come, as the creative window has been opened wide for developers. The rest will be up to them. You've got to remember that a system doesn't build games, developers do. The system only enables them to do more than they've ever been able to do before. It's going to take time for most developers to really grasp the full power at their hands.