R U S E Pushed Back to September

Public betas these days can often be little more than glorified demos, with marginal difference between the test build and the final product. It doesn’t look like that’s the case with R.U.S.E., however; Ubisoft’s ambitious strategy game is being delayed to make improvements based on community feedback from the beta.
Strategy Informer spotted a note on the game’s Facebook page, where the developers revealed plans to push R.U.S.E. back until September. The game was originally expected to arrive on June 4, but the dev team opted to take some extra time to adjust the game’s balance, improve the AI and pathfinding, and fix some issues with lag, among many other tweaks.

"While we understand how disappointing this news will be for many, rest assured that this is the best decision for R.U.S.E. and that this extra time will allow us to implement many of your suggestions and improve the multiplayer experience while polishing the overall game," reads the Facebook announcement. 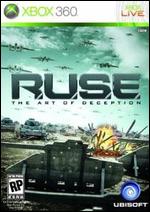 Xbox one no signal
Post by debrartin
0 Replies, 38996 Views