Crysis 3 leaked on accident by Origin

Considering the franchise’s popularity, there wasn’t really any doubt about another Crysis game being in the works, but the upcoming entry has been confirmed after a series of leaks. EA jumped the gun today, briefly posting Crysis 3 on Origin. The listing was swiftly retracted, but not before Webgoers could grab a screenshot (below). Although Origin pulled the entry, remnants of the download page are still indexed on Google.

Since that blunder, NeoGAF readers have discovered high-resolution box art and a teaser indicating that Crysis 3 will be featured in an upcoming issue of Game Reactor. If you haven’t caught on yet, there are few official details, but the box art depicts a Crysis soldier donning a nanosuit and a lethal compound bow. The background reveals an urban setting, suggesting that the game won’t return to the jungle -- or at least not entirely.

Based on the premature listings, Crysis 3 will be ship on PC, Xbox 360 and PS3 for $49.99 -- $10 cheaper than Crysis 2’s launch rate. A pricier Limited Edition is expected, but there’s no word on what it’ll have. In a statement to The Verge, EA said "the best kept secret in shooters just can’t be contained," though the company won’t cough up more details until April 16 -- presumably coinciding with Game Reactor’s publishing schedule. 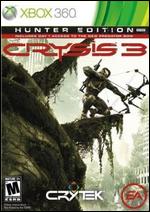