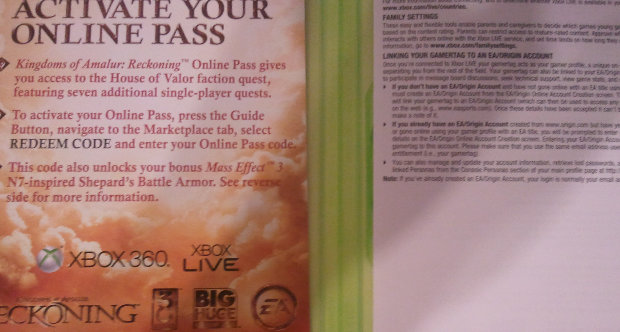 EA is finally ditching Online Passes so the three-year DRM experiment clearly didn’t work out quite as it had hoped, but how bad was it? "The amount of money that we made, it didn’t replace the amount of frustration we put on our customers and it didn’t offset the reputation damage it caused the company," EA Labels president Frank Gibeau has said at E3. Ah. So quite bad.

Gibeau described the scheme as "flat out dumb" in the interview with Joystiq. "So we said ’it’s not worth it,’ and so the idea was, look, ’don’t do stuff like that anymore.’"

He points out, astutely and blimming obviously, that people who bought a used copy of FIFA might still pay for packs in its wildly successful Ultimate Team mode--if only it weren’t locked away behind an Online Pass. If you’re not sporty, think of buying Mass Effect 3’s multiplayer item packs.

"Frankly, we’re being more nuanced and sophisticated about it. Before we used a blunt instrument. Now we’re going to be like ’Look, they own it, they bought the disc and it’s theirs. They have a legitimate right for not doing anything illegal,’" Gibeau explained.

"If we want to be progressive about it, we will make online services available to them that if they want to buy they can, but they don’t have to. At least that way we participate in some monetization. The reputational damage [Online Pass] was causing us was in excess of the dollars we were making."