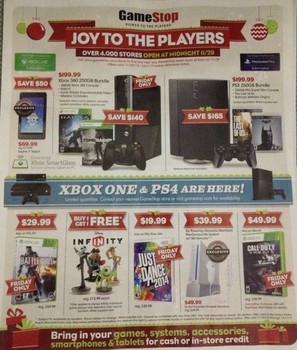 The deal hunter’s favorite time of the year has arrived yet again as Black Friday ads for 2013 have begun leaking. The first gaming related leak hit Friday and it is from dedicated game retailer GameStop with discounts on the PS3 and Xbox 360 bundles, Battlefield 4, Playstation Plus subscriptions and more.

First, there are no discounts at all for any Playstation 4 or Xbox One consoles, games or accessories. Since both consoles will have just launched before Black Friday, this isn’t surprising. That said, you can pick up a year’s PS Plus subscription from GameStop for $29.99 (regularly $49.99) on starting at midnight Friday, Nov. 29. Meanwhile, a 3-month Xbox LIVE Gold subscription is available for $14.99 which is $10 off its regular price.

The Playstation 3 and Xbox 360 do receive some nice bundle deals though. The 250GB Xbox 360 bundle that comes with Halo 4 and Tomb Raider will be available for $199.99 as will the 250GB PS3 bundle that includes The Last of Us and the newly released Batman: Arkham Origins. Sony is also introducing an Azure Blue PS3 that comes with the Jak & Daxter Collection but it is priced at $249.99.

The Wii U Deluxe will remain at its $299.99 price but aSkylanders: SWAP Force bundle is being introduced at the same price and comes with a $25 gift card.

As for individual game deals, Battlefield 4 will be available Friday only for $29.99 on the PS3, Xbox 360 and PC. Remember that this game is part of the "trade up" program where you can spend $10 to upgrade the game to the PS4 and Xbox One versions. So, next-gen owners will be able to grab it for $40.

Meanwhile, Diablo III, The Last of Us and Beyond: Two Sould will be available for $39.99 and Halo 4 Game of the Year Edition for $29.99 among others.

Fans of Disney Infinity will be able to buy one character and get a second free with playsets also available at half off with the purchase of the Starter Pack for $59.99.

N.B. The above deals apply to the US only and are in US prices. Hopefully we can look forward to similar Black Friday deals here in Canada.