Will there ever be another Viva Pinata game? Only if Rare equips all the Pinatas/Pinatae with bazookas and throwing stars - amirite, peddlers of received wisdom about market trends? Posting on Reddit, Microsoft PR wizard Larry "Major" Hryb "Nelson" has offered a bit of solace to fans dismayed by the IP’s continued absence from shelves.

"FYI: I sent this thread to the head of Rare," the Major told the instigator of a plea for the franchise’s return. "So I am sure he’s lurking here. Somewhere." A ridiculously threadbare basis for a news story, you object? My, my, that sounds uncannily like the sort of thing a person who DOESN’T WANT TO PLAY ANOTHER VIVA PINATA GAME would say. We have ways and means of dealing with your ilk, backstabber.

The idea isn’t as unlikely as it may sound, anyway. We know that Rare has ideas for how a new Viva Pinata might use Xbox One’s Kinect - the studio is undeterred by hardcore cynicism about the peripheral (and motion control at large).

We also know that Studios boss Phil Spencer doesn’t want Rare to just make Kinect games - he’s suggested that a new platformer would be nice, and platformers aren’t worlds away from top-down sugar animal management sims, are they? Come on, Spencer. If you can greenlight a new Zoo Tycoon...

Any hopes to share? I’ll be over in the corner if anybody needs me, eating a nice, restorative bag of sugar. 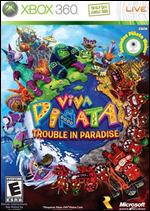