Sega Sports™, the brand that continues to set new standards in sports gaming, today announced the release of "Sega Sports™ NFL 2K2" for the XboxÔ video game system from MicrosoftÒ , marking the first Sega Sports title to be released on this gaming console. Developed by Visual Concepts, a member of the Sega group and creators of the top-selling "Sega Sports NFL 2K series," "Sega Sports NFL 2K2" will make its mark on this new system by offering a game with deep Artificial Intelligence, detailed facial animations and authentic TV-style presentation.

"With the release of ‘Sega Sports NFL 2K2,’ Sega Sports is now an established and critically acclaimed content provider for multiple gaming consoles," said Tom Nichols, group director of sports marketing, Sega of America. "With the power of Xbox behind it, ‘Sega Sports NFL 2K2’ will continue to be the NFL simulation game of choice for football fans that want realistic gameplay and true-to-life graphics."

"Sega Sports NFL 2K2" features TV-style presentation including dynamic replays, thorough telestrator analysis and in-depth play-by-play commentary, providing the "smart" football experience that has become synonymous with the Sega Sports brand. Unlike other football sims, "NFL 2K2" commentary is never canned. Using the "history database," commentators will analyze replays and key plays from earlier in the game, as well as make connections between player performance and on-field trends. The Xbox system also features a theater-quality audio experience that enhances both the dialogue lines and ambient background of the game.

New facial animation technology shows the expressions and likenesses of NFL players as they appear in real life, with players reacting to situations on the field with strong emotion. Player’s subtle moves have also been captured, including running backs who "get skinny" to squeeze through holes in the defensive line and defensive linemen who make crunching "momentum-based" tackles. "QB Logic" contains enhanced Artificial Intelligence that allows quarterbacks to react just like their real-life counterparts.

New in-game effects for "Sega Sports NFL 2K2" include natural stadium lighting and shadows, as well as 3D sideline animations which include full teams, camera crews and chain gang, along with enthusiastic crowds and detailed stadiums.

As fans of the franchise have come to expect, "Sega Sports NFL 2K2" for Xbox features updated rosters, stadiums and team uniforms for the 2001-’02 season, as well as new team-specific playbooks that allow gamers to call any play from any formation.

Endorsed by Minnesota Vikings’ wide receiver Randy Moss, who appears on the cover of the game, "Sega Sports NFL 2K2" for Xbox is available at retailers nationwide for $79.95 Canadian. The game is rated "E" for everyone. 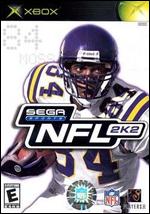